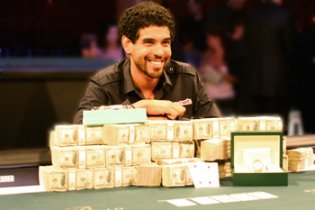 It took 136 hands of play for Williams, a World Series of Poker (WSOP) bracelet winner, to best the star-studded final table. He outlasted UB.com pro Eric “basebaldy” Baldwin heads-up. In the final hand, Baldwin shoved his 20 big blind stack with A-5 of hearts and Williams tanked before calling with pocket deuces. The flop came A-7-6, giving Baldwin top pair and leaving him in a prime position to double up. Then, disaster struck. A deuce hit on the turn, improving Williams to a set, and Baldwin was drawing dead.

Williams told Poker News Daily following the tournament, “It’s been a long time coming. There’s a core group of us – Nenad Medic, Michael Mizrachi, Tuan Le, Joe Cassidy, and I. Nenad, Grinder, Tuan, and Phil Ivey all had one and it feels good to get one.” On how the WPT Championship title compares to his WSOP bracelet, Williams conceded, “My bracelet? That’s nothing compared to this. That was a $1,500 buy-in Stud event. It was cool to have a bracelet, but this is a WPT Championship.” Williams’ bracelet win came in 2006 and earned him $163,000. Check out our full David Williams interview from the Bellagio.

John O’Shea, the short stack entering the WPT Championship’s final table, was eliminated in sixth place for $199,000. O’Shea committed his last 11 big blinds with 6-3 offsuit and found a call from seven-time WSOP bracelet winner Billy Baxter, who picked up A-10. The board ran out J-8-4-4-7 and O’Shea hit the rails. The hand boosted Baxter to second in chips.

After dropping a 4.4 million-chip against Williams, Baxter was ousted in fifth place. He open-shoved all-in with A-J of spades and Williams, looking to polish off the poker veteran, called with K-10 of hearts. Amazingly, the flop came A-Q-J, giving Williams the nuts and Baxter top and bottom pair, but no saving grace came on the turn or river. Baxter earned a $246,000 consolation prize and Williams suddenly owned half of the chips in play entering four-handed action.

High-stakes cash game pro David Benyamine was the next player to depart. Benyamine open-shoved for 16 big blinds with Q-J of hearts. Shawn Buchanan tanked before calling with A-5 and the better hand held. Buchanan ultimately took down the pot with two pair and nearly caught up to Williams in chips.

Buchanan scooped a 2.2 million-chip pot to claim the chip lead after shoving all-in on a board reading Q-8-5-J against Baldwin. However, on his final hand, Buchanan’s pocket queens could not withstand the pocket nines of Williams. In the battle of the chip leaders, the flop came J-9-2, giving Williams middle set, and no queen came on the turn or river. Buchanan picked up $587,000 as the third place finisher in the 2010 WPT Championship. Williams held a 7:2 chip lead entering heads-up play against Baldwin.

Williams never let up and Baldwin was sent packing in second. Here were the final results from the WPT Championship:

Buchanan was the lone player at the table who could catch Faraz “The-Toilet” Jaka in the WPT Player of the Year race. However, Buchanan had to win the tournament in order to do so. Consequently, Jaka was crowned the Season 8 Player of the Year.

Despite not announcing the full 2010-2011 schedule, WPT officials have released the dates of three upcoming European stops: