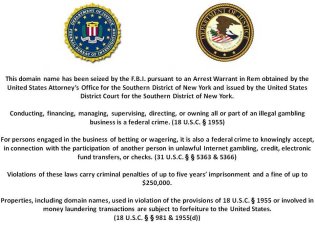 In breaking news, PokerStars, the world’s largest online poker site, has begun processing cashouts for U.S. players. Refunds for Americans began on Tuesday afternoon, when a message started appearing that instructed players to cash out their funds.

When players from the “Red, White, and Blue” log into PokerStars, they’re now met with a pop-up message that reads, “We are pleased to announce that the cash out option in the PokerStars Cashier is now available. Please log into your PokerStars account and visit our Cashier to withdraw your real money account balance at your convenience.”

The message adds, “Due to the expected high volume of cashout requests, we anticipate a delay in processing and delivery of your funds. Rest assured that your funds are safe and we will process your request as soon as possible.” Several options to cash out are available, including a wire, paper check, and bank transfer. The minimum to process a paper check is $100, while there does not appear to be a minimum for a bank transfer.

On the popular online poker forum PocketFives.com, players were jumping for joy upon hearing the news that PokerStars cashouts were finally being processed. One member of the PocketFives.com community wrote, “I saw the notice when I logged in. I proceeded to the cashout screen anyhow. 3 options were listed for me: 1. Echeck – Red letters said some language about not being available yet, 2. Wire Transfer – Didn’t meet $50k min, and 3. Check in USD.”

In a press release sent to the media on Wednesday, PokerStars officials noted that sufficient funds were available to cover what is presumably a tidal wave of cashout requests from the United States. The site’s press release read in part, “In agreement with the U.S. Department of Justice, PokerStars has made arrangements with a U.S. bank and today began the process of returning player funds to former customers in the U.S. The funds to cover these withdrawal requests are readily available.”

Following the indictments of its founder, Isai Scheinberg, and head of payment processing, Paul Tate, back on April 15th, PokerStars temporarily lost its dot-com domain name and transferred operations over to PokerStars.eu. Last week, the room reached an accord with the U.S. Department of Justice to regain control of its dot-com website in order to process U.S. player cashouts.

On why PokerStars was so quick to process cashout requests, the site commented in the same press release, “All player deposits for players outside the U.S. are completely safe and secure. PokerStars has always held all such funds in accounts that are segregated from company assets, in compliance with the strict licensing laws of the Isle of Man.”

The PokerStars contingent trumpeted the site’s cashout news on Twitter. Among them was PokerStars pro and former World Series of Poker Main Event final tablist Dennis Phillips, who wrote, “PokerStars makes U.S. player deposits available for cashout. Log on and get your money. Thx Pokerstars for coming through!”

Now everything was rosy, however. Several players remained concerned about their Frequent Player Points, or FPPs, that they had spent several years stockpiling. While news broke that PokerStars had converted T$ and Tournament Tickets into cash, no news about FPPs had been released. However, one member of PocketFives.com wrote, “According to the 2+2 podcast, Stars is in negotiations with the DOJ over reopening the FPP store. FPPs not just thrown away. It’s an ongoing process. Patience.”