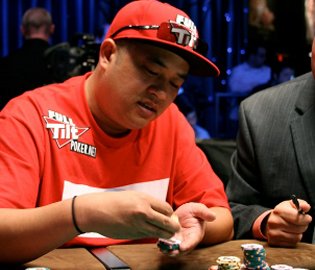 Soi Nguyen was the first elimination of the World Series of Poker (WSOP) Main Event. Nguyen was all-in with A-K and up against Jason Senti’s wired pair of queens. Senti flopped a set of queens, but a 10 also came on the flop to give Nguyen a gutshot straight draw to a jack. However, a running 9-K sent Nguyen to the rail as the tournament’s first elimination. Nguyen was mobbed by media in the lobby and his railbirds continued to shout his name in earnest despite the early exit. Full Tilt Poker interviewed him and a variety of one-on-one segments were also conducted.

Walking around the lobby of the Penn and Teller Theater at the Rio today, you’ll notice that rabid fans are out in earnest. They’re packed into the beer line at the concession stand and reading programs that feature profiles of their favorite WSOP Main Event November Nine members.

Media appear to believe that John Racener or John Dolan will take down the $8.9 million top prize. Those found in the crowd today include Phil “OMGClayAiken” Galfond, Barry Greenstein, Annette Obrestad, Lauren Kling, Carter King, and Scott Montgomery. The latter pros are all on stage watching the action.

Michael “The Grinder” Mizrachi was quiet in the early going. He didn’t play a pot until the 16th hand of play. Then, Racener scooped a pot of four million after showing pocket kings on a board of 10-7-Q-9-2. Dolan flashed K-Q for top pair and then threw his cards into the muck. Shortly after that, Jason Senti, who wasn’t involved in the hand, went over to Galfond to discuss the action. The two work together on Bluefire Poker, a popular poker training site.

Mizrachi 4bet half of his stack, over six million more, and Dolan, who 3bet in the hand, looked over at Mizrachi, who smiled. The two exchanged stare-downs a la Phil Ivey before Dolan ultimately elected to fold.

On the play so far, Poker News Daily Guest Columnist and ESPN analyst Bernard Lee told us, “Because the stacks are so small since we played so long in July, there’s a lot more action in the first level compared to last year. There has been a lot of action and there have been a lot of all-ins. I do expect two people to get knocked out in the second level.” There were three all-ins in the first four hands.

Given each fan’s allegiance, several spectators have already had run-ins with Tournament Director Jack Effel. After Effel specifically told the crowd not to yell during all-in moments, a fan yelled, “Call” in a hand involving Racener and Senti. Effel barked back on the microphone, “That will get you ejected.”