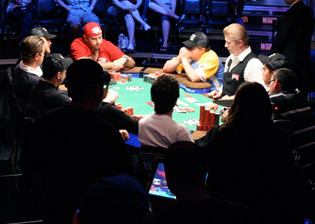 The 2010 WSOP November Nine is finally set and the anticipation can now build towards crowning poker’s next world champion. After a grueling 18 hours played on Day 8 that whittled the field from 27 down to the final nine, the following players have secured their place in poker history. Below the player chip count you will find a running journal of the events that determined the November Nine when play started with 27 players.

The 2010 WSOP November Nine will mark their place in history and become instant poker celebrities, along with enjoying the perks of what promises to be high value endorsement deals.  Play began on July 17th at noon from the Rio at the World Series of Poker Main Event with 27 runners left in the world’s biggest tournament.

The first big hand of the day came on the very first hand as Ronnie Bardah shoved on the button for 2.215 million with both the small and big blind folded.  On the first hand for Michael “The Grinder” Mizrachi, he 3bet Redmond Lee which elicited a fold and showed off pocket Kings.

About 30 minutes into Day 7, Johnny Lodden, a Norwegian pro sponsored by PokerStars, moved in which amounted to 1.47 million.  He was looked up by Matt Affleck who flipped over A-T offsuit against Lodden’s pocket Eights.  The board came K-Q-2-T-7 which paired up Affleck and sent Lodden to the rail in 27th place for $317,161.

The next casualty of the day was Matthew Bucaric who finished in 26th place.  On a flop of J-8-7 with two hearts, Bucaric got the money in with pocket Nines with one heart.  He was looked up by 8-6 with two hearts that made a flush on the turn and held up to send Bucaric out of the tournament.

Mads Wissing came into the day playing some great poker but in the end, it was one great read and one horrible bad beat that took him out.  Wissing checked the big blind with T-8 with two spades and the flop came 6-3-T.  William Thorson, who had limped in from the small blind, check raised and was looked up by Wissing’s top pair as Thorson revealed J-3 for bottom pair.  The turn, however, proved fateful at Thorson spiked a Jack and improved to two pair which eliminated Wissing in 25th place.

24th place will show Ronnie Bardah’s name in the standings as he was eliminated at the hands of Italian pro Filippo Candio.  Bardah got all his money in with A-K suited and Candio happily insta-called with pocket Aces.  The board didn’t hit Bardah at all and he was sent to the rail for a great cash in his first Main Event.

Many fans on the rail felt that Robert Pisano was one of the odds-on-favorite to make the 2010 WSOP November Nine, but instead, they will leave disappointed.  Crippled by an earlier hand, Pisano was forced to put in his stack with J-9 offsuit and was called by Pascal LeFrancois who held Q-8.   With a flop of Q-T-2 LeFrancois hit top pair which held in the end, sending Pisano out in 23rd place.

About ten minutes after that elimination, William Thorson’s great run in the Main Event would end as well.  John Dolan opened and got two callers who were both in position.  Thorson had J-T of diamonds and made a huge squeeze for all his chips, but was immediately called by John Racener who had a concealed monster of pocket Kings.  Thorson ends his run in 22nd place.

After three and a half hours of play, Redmond Lee continue to ride the shortstack for his life. After biding his time, he found a hand worthy of his shoving range and raised all-in. Michiel Sijpkens called on the button and both players turned over their hands. Unfortunately for Lee his pocket fours were dominated by Sijpkens and his pocket tens. The board of 7-6-J-A-Q didn’t improve either player and Lee was eliminated in 21st place.

The sickest hand of the Main Event might have just been played at the ESPN featured table between Filippo Candio and Joseph Cheong. The hand began with Candio raising and Cheong 3betting to 1.12 million and Candio making the call. The flop came out 6-6-5 with two clubs and Cheong continuation bet for 1.55 million. Candio took some time and announced a raise to 4.425 million that sent Cheong into the tank. After a good amount of time he moved all his chips in the middle, forcing Candio to make a decision for all of his chips. After some time, Candio made the call with 7-5 for two pair, but Cheong flipped over pocket Aces for a huge lead in the hand. The turn brought the 8 of spades, which was not a good card for Cheong as it gave Candio new outs with a straight draw. The river spiked the 4 for the rivered straight for Candio who won a massive 27 million chip pot to take the lead with fans in the crowd going wild at the result of that hand.

Only three minutes later we would have another casualty in Patrick Eskandar who was eliminated in 20th place. The fateful hand would have Eskandar putting all his chips in pre-flop and being called by two players. When Soi Nguyen made a bet at the Q-9-T flop his opponent folded, with Eskandar showing A-7 and needing help in order to survive. With the turn T and the river K, Eskandar was eliminated from the Main Event.

Two of the top chipstacks tussled when Filippo Candio raised to 510,000 and got 3bet by Jason Senti for 1.275 million. With a call from Candio, the two saw a flop of 9-8-7 rainbow and both players checked through. The 3 on the turn came and Candio checked and Senti bet out for 1.525 million, which was called. Finally on the river, a 7 hit and Candio checked again and Senti fired what proved to be a value bet to 2.7 million with Candio folding quickly. Senti was gracious enough to show pocket Queens to the table after the hand was done.

Michiel Sijpkens came a long way to play in the Main Event, but will leave having failed in making the final nine players. He open-shoved for 2.5 million with pocket Jacks and was called by John Racener with K-Q offsuit. The flop brought 4-Q-9 with two clubs to put Racener in the lead. The 7 of clubs game Sijpkens the flush draw, but with the deuce of hearts on the river, he was eliminated in 19th place.

With the field now at just two tables, tournament officials consolidated the field down to just two tables. The good news for those players that remain is that they all will enjoy a pay increase from here on out which will be at least $396,967.

The 18th spot in the tournament would go to Full Tilt Poker pro Scott Clements. With action in the hijack seat, Michael Mizrachi raised to 485,000. Clements moved in on the button for 4.9 million but Matthew Jarvis was in the big blind and reshoved all in. Mizrachi tanked and eventually folded, and Jarvis showed A-K against Clements and his A-Q. The better hand held up and Clements was sent to the rail.

The next elimination came when David Bake, Matt Affleck and Jonathan Duhamel tangled. Baker checked a Q-2-4 two spade flop to Jonathan Duhamel who bet 1.175 million. Affleck folded and Baker shoved in all his chips for the check-shove maneuver. Duhamel called with pocket Kings and Baker was facing J-7 of spades for a flush draw. The turn and river didn’t bring a spade and Baker left in 17th place.

The next player to hit the rail was Benjamin Statz who moved all in from the big blind for a total of 4.98 million, which was called by Matthew Jarvis. Statz showed A-5 of hearts and Jarvis showed K-Q, and with a monster flop of K-K-Q, Statz couldn’t find running Aces to stay in and left in 16th place.

In one of the most shocking eliminations of the night, Matt Affleck busted out in 15th place in a huge pot. Affleck had the button and 3bet to 1.55 million and was 4bet to 3.925 million which was flatted by Affleck. The flop came T-9-7 rainbow and Affleck bet and was called. A Queen came on the turn and Affleck got all the chips in. After a ton of time in the tank by Duhamel he made the call with Affleck showing pocket Aces and Duhamel turned over pocket Jacks. The crowd gasped in absolute horror as an eight spiked the river to give Duhamel the sick suckout for a ridiculous 42 million pot.

After another hour of play, Hasan Habib finally wasn’t able to leverage his shortstack any more. he shoved all in pre-flop for 1.805 million with A-9 suited and was called by Racener who had A-K suited. The flop came T-9-3 with two spades which gave Racener the flush draw and Habib the pair. The ten came on the turn to give Racener some outs but the Ace on the river spiked and sent Habib to the rail in 14th place.

Duy Le had his run end in 13th place for $500,165 when his A-Q offsuit was outflopped by John Dolan’s K-6 on the board of K-4-J. Le needed a ten or Ace to improve but the turn came a 5 and the river brought another 5, sending Le out of the tournament.

One of the recognizable pros left in the tournament exited in 12th place as Adam Levy got his money in before the flop with K-Q. Chip leader Jonathan Duhamel was the next player to act and insta-called with pocket Aces. Levy’s massive following groaned in disbelief and after the board ran, Levy left the tournament but took home $635,011.

One player that looked primed for a November Nine seat went out in dramatic fashion. Jonathan Duhamel opened to 750,000 and fellow Quebec native Pascal LeFrancois called the raise on the button. Joseph Cheong then 3bet from the small blind to 2.55 million which folded out Duhamel. LeFrancois made a read that Cheong was squeezing light and pushed all in which was immediately called by Cheong who flipped over pocket Kings. LeFrancois shrunk in his chair holding Q-J suited to spades, but gained a glimmer of hope when 6-J-2 flopped. However, the turn King gave Cheong a winning set and shockingly sent LaFrancois to the rail in 11th place.

The final player has busted and it turned out to be good guy Brandon Steven who shoved in all his chips with A-K. He was looked up by Matthew Jarvis who showed pocket Queens. For his tournament life, Steven needed to win a race and didn’t get any help on a flop of 4-3-T. The turn of 4 didn’t help Steven improve and he would need a six outer to save his tournament run. With the 5 on the river, Seven was eliminated in 10th place and our November Nine were set.