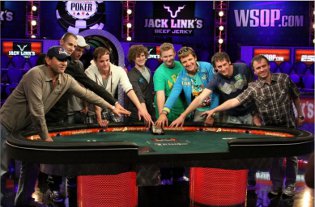 Everyone knew where this road was headed, we just didn’t know who would get there.  Just 22 players entered play at the 2011 World Series of Poker (WSOP) Main Event on Tuesday with a chance to make the final table and come hell or high water, the field was going to be narrowed to nine before the tournament was adjourned until the fall.  No more playing for a set number of levels.  We were going to get rid of 13 players if it took all night.  Fortunately, it didn’t take all night (so long as you were following the action in Las Vegas) and we now know the identities of this year’s November Nine.

Considering the increases in payouts at this stage of the game and the importance of advancing from Tuesday to November, one would have expected play to slow to a crawl as players became very careful not to bust out.   Not so yesterday.  Even with a the usual breaks, a two hour dinner break, and an extra one hour break, the field was whittled to the final ten before 10:00pm Pacific time thanks to lots of three-betting, four-betting, and risky all-ins (Konstantinos Mamaliadis moved all-in with 8-2.  Granted, he was short, but still.  Yes, he lost that hand).

The ESPN announcing team of Lon McEachern, Antonio Esfandiari, and Norman Chad predicted that eliminating that last player to determine the November Nine would take a long time, and it did.  With the media attention, sponsorship deals, and a more than $200,000 prize jump waiting for them between now and November, nobody wanted to be the final table bubble boy.  In some ways, even though he was to win $607,882, it is worse to be the November Nine bubble boy than the standard “in the money” bubble boy.  And while play did slow down significantly as most hands didn’t get past the pre-flop stage, it still went about two hours faster than last year’s six hour marathon.

In the end, it was John Hewitt of Costa Rica who made the other nine players very, very happy.  Ireland’s Eoghan O’Dea (son of Donnacha O’Dea, who has made two Main Event final tables) opened the pre-flop betting to 1.1 million chips, with blinds at 250,000/500,000 and a 50,000 chip ante.  Hewitt, who had been riding high for much of the day before taking a bad beat when his A-K lost to Pius Heinz’s K-J, pushed for his last 3.875 million.  It was a race: Hewitt’s 3-3 versus O’Dea’s K-J.  Despite not hitting one of his cards, it was a good flop for O’Dea, as the Q-T-7 gave him an open-ended straight draw.  The Ace on the turn clinched the hand for the Irishman, sending the poker room into a frenzy.  Hewitt was gracious in defeat and his fellow tablemates were simultaneously congratulatory and empathetic to him.  While the remaining players were no doubt thrilled they had made the November Nine, they knew what a disappointment it was for the likable Hewitt to fall short.

While everyone moving on to November has done a fantastic job, perhaps the most impressive player of the day was Matt Giannetti.  He was one of the bigger stacks during the early part of Day 8 before running into a painful hand against Ben Lamb.  With blinds at 150,000/300,000/40,000, Lamb raised pre-flop to 675,000 and Giannetti called.  After the flop of Ah-9h-2d, Giannetti check-called a 700,000 chip bet.  Both players checked the 7d on the turn and Giannetti once again checked the 2h on the river, a card which introduced the possibility of a flush.  With the pot at just over 3 million chips, Lamb made a huge bet of 4 million.  Obviously holding a good hand, but unsure of just how good it was compared to Lamb’s, Giannetti went into the deepest of tanks.  One minute went by, then two.  Then three.  Esfandiari kept viewers interested by analyzing what he thought each player had.  Five minutes.  Eight.  After ten minutes, Giannetti finally made the call with A-9, giving him top two pair.  To his dismay, though, Lamb flipped over 2-3 for three-of-a-kind, giving him the large pot and sending Giannetti’s stack down to under 10 million.

Giannetti was noticeably shaken after that and even stepped away from the table a short time later to collect himself.  Struggling to stay alive as he made it to the final ten, he held firm and didn’t make any rash moves.  He was able to raise a couple times pre-flop without moving all-in to collect the blinds and antes, which at that point meant he was increasing his stack by around 10 percent.  He finally decided to put all of chips at risk, twice doing it with pocket Jacks, and both times doubling-up.  Matt Giannetti had emerged from the emotionally draining hand earlier in the evening and had climbed back from the November Nine bubble to make it to the final table with the third largest chip stack.

Here is how the chip counts stack up (pun intended):

It is a final table with a very international flavor: just three Americans and one player each from the Czech Republic, Ireland, Belize, Germany, Ukraine, and England.  At this point, everyone is guaranteed at least $782,115 with the winner taking home $8,711,956.

The players are now on a three and a half month break as they prepare for the rest of their Main Event journey.  Play will resume on November 5th, will pause when there are just two players left, and will pick up again on November 7th to determine the next No-Limit Hold’em World Champion.