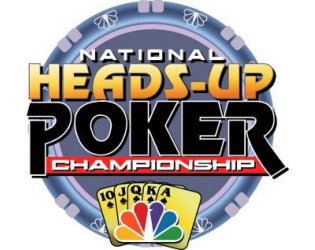 Black Friday has claimed another victim.  Originally reported by Wicked Chops Poker late last week, the popular NBC National Heads-Up Poker Championship (NHUPC) has been cancelled indefinitely.  The annual invitational tournament had been a highlight of poker television since 2005.

The decision to not hold the tournament in 2012 was not completely unexpected.  Both PokerStars and Full Tilt Poker were the primary advertisers and therefore sources of revenue for the NHUPC and with the hits both have taken as the result of Black Friday – PokerStars lost all of its United States customers and Full Tilt has been shut down completely – the money is simply not there to support the yearly event.  Not only did the poker rooms pay to advertise, but they also paid the $20,000 buy-ins of many of the players, as many were sponsored by one of the two sites.

The NHUPC is not the first made-for-TV poker competition to bite the bullet because of Black Friday.  NBC’s Poker After Dark, which was sponsored by Full Tilt Poker, and Fox Network’s Big Game, sponsored by PokerStars, have also been cancelled.

Wicked Chops received confirmation of the decision from NBC Sports Senior Director of Communications Adam Freifeld, who didn’t completely shovel dirt on the tournament, saying that NBC will “continue to evaluate our poker programming.”

The National Heads-Up Poker Championship was a $20,000 buy-in invitation-only bracket-style tournament held each spring in Las Vegas starting in 2005.  Similar to college basketball’s March Madness, 64 players competed in single elimination heads-up No-Limit Hold’em matches over the course of five rounds of play.  The sixth and final round was a best-of-three contest between the two finalists.  The first NHUPC was held at the Golden Nugget, while the rest all took place at Caesars Palace.

The inaugural NHUPC featured a clash of the titans in the finals, with 11-time World Series of Poker (WSOP) bracelet winner Phil Hellmuth defeating Chris Ferguson.  The following year, Ferguson once again found himself in the finals and once again found himself on the short end, falling to Ted Forrest.  In 2007, Paul Wasicka defeated Chad Brown and then in 2008, it was finally Ferguson’s turn, as he bested Andy Bloch in the finals.  Vanessa Rousso almost became the first female NHUPC champ in 2009, but lost to Huck Seed, but Annie Duke was able to earn the title in 2010, defeating her good friend, Erik Seidel.  Like Ferguson, Seidel was able to move one step up in the rankings, claiming the crown this year by beating 2003 WSOP Champ Chris Moneymaker.

Over the years, there was some controversy regarding the selections for the tournament, as many in the poker community felt there were too many “poker celebrities” and non-poker celebrities invited, rather than those who were truly the most deserving, such as some of the “new school” internet poker stars.  That is not to say that those who weren’t seen as deserving couldn’t play poker, though.  In 2007, actor Don Cheadle defeated Phil Ivey in the first round and in 2008, former baseball star Orel Hershiser made it all the way to the quarter finals, besting Ted Forrest, Allen Cunningham, and Freddy Deeb.