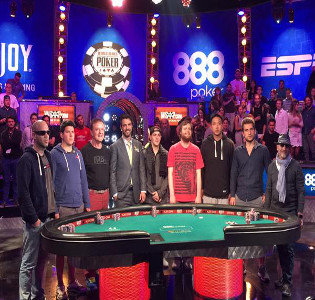 After a week of poker, a week of long, mental exhausting days, the final table of the 2015 World Series of Poker (WSOP) Main Event has been reached. We have our November Nine. Day 7 began with just 27 players remaining, spread across three tables and did not end until around 1:30am, when Alex Turyansky was eliminated in tenth place.

The chip leader going into the final table – by a mile – is Joe McKeehen. His 63.1 million chips is more than double that of his closest competitor, Israel’s Zvi Stern, who has 29.8 million. In fact, McKeehen’s chip stack is the largest heading into final table play since Jamie Gold ran over the field in 2006. McKeehen could really do no wrong on Tuesday, never really getting into trouble, rarely seeing some huge confrontation. He doubled an opponent up once or twice, but when you have over 50 million chips and your opponent only has a couple million, you can afford to do that.

So easy was his run to the top (or seemingly easy) that players actually gave him chips. Shortly before the dinner break, he and Daniel Negreanu got into a hand, Negreanu check-calling McKeehen to the river. With the board reading J-T-4-6-4 and a 2 million chip bet from McKeehen on the table, Negreanu literally paid to see McKeehen’s cards. According to the WSOP.com report, Negreanu said, “You have it every time, huh? That’s not cool. You can’t just have it every time.”

Negreanu called the bet and saw that McKeehen did have it, pocket Kings. Negreanu was already a short stack and now he had only 10 big blinds left because he couldn’t believe McKeehen’s good fortune.

Speaking of Negreanu, he was the one most people wanted to see make the November Nine. One of the most popular players of all time and a recent inductee into the Poker Hall of Fame, Negreanu was making his deepest Main Event run since 2001, when he finished 11th. Then again, this field is 10.5 times larger than that one, so this was his best march into the Main Event in his career. But the dream of the championship bracelet ended last night, as Negreanu bowed out in 11th place. It was a tough beat, too. Negreanu had recovered, getting his stack back up to over 6.5 million when he went all-in on the flop of A♦-K♣-T♦ with A♠-4♦. McKeehen called him with J♦-3♦, which is not impressive on its face, but he had a ton of outs, as he was playing both a flush draw and a straight draw. The 3♥ on the turn gave him more outs and the Q♥ on the river completed his straight and sent Negreanu packing.

The remaining players now get a few months off to rest, prepare, ink some sponsorship deals, and make plans for their new-found riches (each player is guaranteed at least $1 million, with $7,680,021 going to the winner). They will begin final table play on November 8th and will stop when four players remain. Those four will come back the next day to play down to two and the heads-up match for the title will be on November 10th.