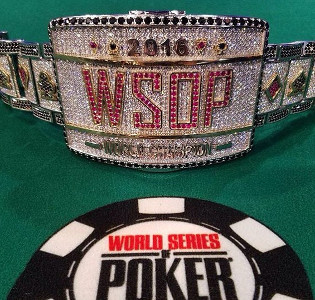 Qui Nguyen continued his domination of the 2016 World Series of Poker (WSOP) final table Monday, as the field was given a haircut from five to three. Nguyen began the day as the chip leader with 128.625 million chips, slightly more than the next two players combined. He finished with almost 200 million, significantly more than his remaining competitors, Gordon Vayo and Cliff Josephy. The November Nine began Sunday and tonight we will know the identity of the newest poker world champion.

Here was how the stacks looked to begin action last night:

Nguyen actually lost his chip lead in fewer than two orbits Monday. On the fourth hand, he doubled-up Michael Ruane and on the sixth hand of play – Hand 104 of the final table – Vayo took the lead in what was arguably the turning point of the final table. Vayo raised to 2.3 million pre-flop and Vojtech Ruzicka re-raised to 8.15 million. Vayo called and the two saw a flop of Q-8-3. Ruzicka bet 6.15 million and Vayo called again. The turn was a 7 (suits had little bearing on this hand), prompting Ruzicka to bet 11.4 million chips, earning another call from Vayo. When the 5 was dealt on the river, Ruzicka moved all-in for 27.85 million and Vayo called. Ruzicka had Vayo slightly covered, so Vayo was in danger of being eliminated.

Ruzicka, as it turned out, was on a pure bluff, showing A-K. Vayo had pocket Eights for a flopped set. He doubled-up to become the chip leader and Ruzicka was crippled and eliminated on the next hand, looking all the while like he had no idea what he had just done.

Nguyen took the lead back a few hands later with some solid aggression, giving both he and Vayo stacks of over 100 million chips.

In the meantime, Michael Ruane couldn’t find much traction and, aside from a short time when Vayo regained the lead, Nguyen kept grabbing pots from his opponents to gradually build his stack. Josephy wasn’t having a much better time of it than was Ruane, but it was Ruane who eventually succumbed.

On Hand 155 of the final table, Nguyen raised to 2.7 million pre-flop with A-J and Ruane moved all-in with K-Q of hearts for his final 15.7 million. The flop of 9-9-2 didn’t help, but a Jack on the turn at least gave him a gut-shot draw for a few more outs. It was an 8 on the river that did him in, giving Nguyen the pot and sending Ruane home in fourth place.

Play continued for a little while longer, allowing Nguyen to add another 20 million or so to his stack to put a lot of distance between himself and the other two men.

The final day of the 2016 WSOP Main Event is Tuesday; play begins at 5:00pm local time (8:00pm ET). Every hand, with hole cards, will be broadcast on the ESPN family of networks, plus Watch ESPN, starting a half-hour later. Play will continue until someone is crowned the champ and is awarded $8 million.