Home 2022 World Series of Poker Europe: “The Opener” Down to Final 24, Play Starts in PLO 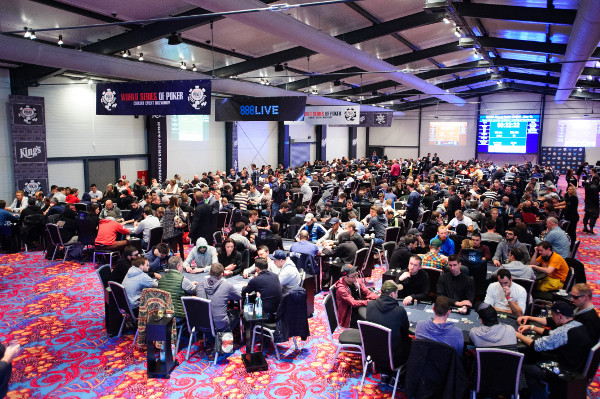 The 2022 World Series of Poker Europe closed its first weekend of action with two events in progress. In one, the plan was to play to the final table, but play was halted with three tables in action. On the other, the best of the European world in Omaha Hold’em stepped up for their second Day One of play.

The plan was to play down to the final table of six in the €350 “The Opener,” Event #1 on the 2022 World Series of Poker Europe schedule, but there was a bit of a problem with that plan. With 386 players coming back on Sunday, it was going to be extremely difficult for the six-handed final table to be reached. That goal, however, was far off in the future compared to a more immediate one – figuring out who would cash in the tournament.

Only 369 players would earn money from Event #1 of this year’s festival, and nobody wanted to be one of those unfortunate seventeen. Within 45 minutes, however, the play was down to hand-for-hand as the money bubble was reached. Once Andrea Ricci knocked off Daniel Menger when his open-ended straight draw failed to come home on the river, the final 369 players were determined, and the money began to flow.

Part of the battle involved an interesting hand between Czech pro Martin Kabrhel and the U. S.’s Maria Teixeira. After Kabrhel did not catch a flush against a pocket pair of sevens that Teixeira held, Kabrhel began to slowly cut the chips out to meet the all-in Teixeira’s bet. The dealer reached over to pick the process up, causing a flap between the dealer and Kabrhel. After being reminded that the dealer is in charge at the table, Kabrhel would issue a snide comment and sit back; he busted in 224th place after shipping much of his stack to Teixeira.

The players would make a valiant effort to get to the final six, but it was just too much of an ask. As the clock passed 3 AM (Czech Time), WSOPE officials decided to call it a night with 24 players still in the running for the championship. They will come back on Monday for Championship Day, in which the first bracelet of the 2022 WSOPE will be determined.

Looking to demonstrate its power over players, Pot Limit Omaha took center stage on Sunday as the second of two-Day Ones wrapped up play. On Day 1A, Stanislav Halatenko would assume the leadership mantle, but there were plenty of players who decided to take a shot on Day 1B. There was also the question of whether the €200,000 guarantee would be topped in the €500 buy-in event (with unlimited reentry).

With Day 1B now in the books, it appears that the guarantee was topped by a close margin. The 566 entries that the two-Day Ones generated created a prize pool of €268,850. Official numbers are not yet in but, by the payout breakdowns traditionally used by the WSOP, the 86 players who come back on Monday will all be the recipient of a min-cash of €892.

The final 86 players are led by Italy’s Biagio Morciano, who will sleep much better tonight knowing that he has 542,500 in chips for play on Monday’s Day Two. He will be closely pursued by these men:

The tables will be busy in the King’s Casino on Monday, as it is planned that Event #2 will play down to a champion while Event #1 works out its victor. This is going to occur while Event #3, the €1000 Mini Main Event, will open its Day 1A festivities. By Monday night in Rozvadov, we will know the names of at least one, and hopefully two, of the first champions for this year’s WSOPE.