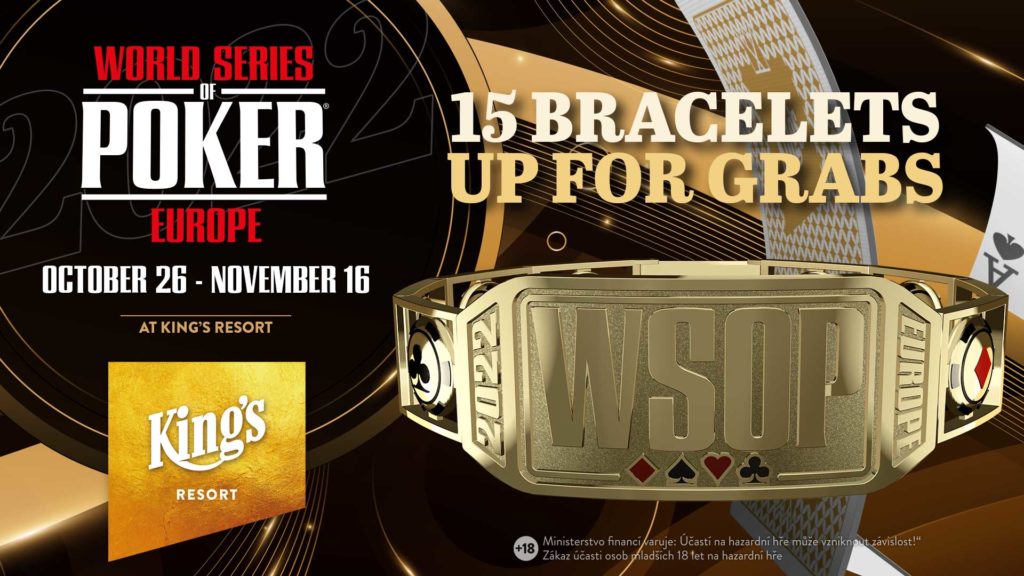 It snuck up on the poker world quietly, but the 2022 World Series of Poker Europe is underway. Once again being held at the King’s Casino in Rozvadov, Czech Republic, the 2022 WSOPE officially started on Wednesday with “The Opener,” the €350 buy-in tournament that kicked off the action for the next couple of weeks. Over the span of four Day Ones – and unlimited reentries – the €500,000 guarantee was crushed by the throng of players that flooded the King’s tournament floor.

Slow Start for Days 1A and 1B

Day 1A of Event #1 at the 2022 WSOPE would see a familiar name make it into the Top Five of the leaderboard – but only after firing EIGHT times to earn a stack. After stepping into the breech a bit late (thank you, late registration), Martin Kabrhel. the all-time leading money winner in Czech poker history, pounded the table with reentries until one of them finally stuck. As the tournament is on Kabrhel’s home turf in Rozvadov, it was important for him to be among the top players of the 25 survivors of the Day 1A carnage:

Thursday saw Day 1B come to the gates and, just like its predecessor, it saw some frenetic action. The numbers ticked up as to the entries at 335, but there were only 52 souls that found a bag at the end of the night. Another Israeli player, Sergey Karchemsky, was able to capture the lead for the Day 1B festivities, but it was not enough to push him past his compatriot Rosenwasser for the overall lead.

Bernhardt was the beneficiary of a double knockout on the last hand of the evening, catapulting him into the Day 1B Top Five.

To say the players poured out of the walls of the King’s Casino would not be a stretch. The unlimited reentries of “The Opener” certainly had an impact, as did the chance to pick up the first bracelet of the 2022 WSOPE. But the Day 1C field made up more than half of the guarantee on its own and assured the fact that the €500,000 guarantee would be obliterated.

The 722 players were whittled down to only 120 by the end of action on Friday and a new overall chip leader was crowned. Denmark’s Steffen Jensen was able to scoop up an impressive 386,500 chips, allowing him to eclipse the stack of Day 1A leader Rosenwasser. The Day 1C field would see four players crack the 300K mark, putting them in great shape for Day 2 action.

If Day 1C was big, Day 1D said, “Hold my pilsner.” 1,232 entries were taken in at the King’s Casino cages, ensuring the prize pool would rocket over the €500K mark. The final prize pool from the 2454 entries received made for a €734,359 pile of cash for the final 369 players to divvy up. It also ensured that there would be a complete revamping of the leaderboard, with all the chips in action, as unofficial counts show the United Kingdom’s Ian Greenwood atop the standings with a massive 541,000 chip stack.

Crunching down the numbers shows that the top SIX from Day 1D are atop the unofficial overall Day One leaderboard for Event #1 of the 2022 WSOPE with 386 remaining:

For those looking for players from the U. S., you’re going to have to look down the standings a bit. Waterbury, CT’s Maria Teixeira is the highest-ranking U. S. player in the field (and, it appears, the highest-ranking female) and she should make the money easily with her 200,000 stack. That cannot be said for everyone, however.

It is not enough to have just gotten through to Day 2 in this tournament, however. 386 players will be back on the felt Sunday, but only 369 players will be able to capture cash and put a line on their Hendon Mob resume. That means that there will be seventeen players who will have slogged through the Day One minefield that won’t have anything to show for their efforts.

The plan for Sunday is to take the field all the way down to the final six players, meaning there is a great deal of work in store for “The Opener” survivors. The Day Two action will be alongside the Day 1B play in the €500 Eight Max Pot Limit Omaha event, meaning the King’s Casino will be bustling as the 2022 World Series of Poker Europe ramps up the action.