Home A Visit From St. Doyle 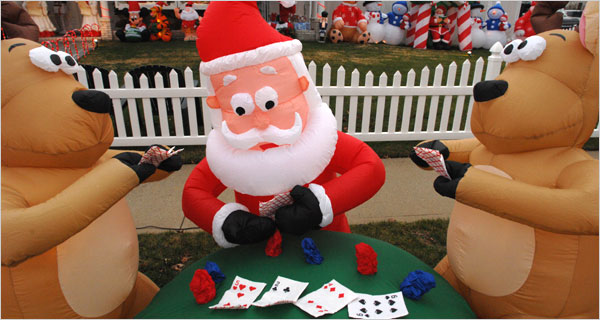 As has become tradition here on Poker News Daily (and it has been for this writer since he penned it back in 2005), it is time to celebrate the holiday season. With that in mind, we take a poker-centric take on a Christmas classic. The names have all been left as the original was written, but perhaps someday this writer will update the names checked on the pages!

So, without further ado and with all due apologies to Clement Moore, here’s our take on “A Visit from St. Nicholas:”

A Visit From St. Doyle

“In Chris, in Barry,
In Howard and Annie
In Jennifer, in T. J.,
And Phils, Hellmuth and Ivey”

“The game, it is great,
The time spent is a blast.
But it isn’t everything,
Enjoy each day like it’s your last.”

“Play the game and enjoy
Who knows, you may be great.
But remember friends and family
Those things never abate.”

The eight and I nodded in agreement
As a toast was raised to The Man
And he grandly announced,
“Everyone all-in, last hand.”

The cards whisked to us
As did the flop, turn and river
And we all peeked at our hole cards
To see what was delivered

The mood was joyful
And as they faded from sight
St. Doyle looked back to me
And had one final insight

“The best to you in the game
And the best in your life.
May your hands be huge,
Merry Christmas and good night.”