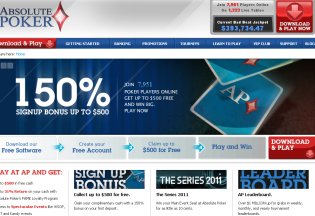 According to a report by MSNBC on Wednesday, indicted online poker rooms Absolute Poker and UB were to be filing for bankruptcy, leaving thousands of players even more concerned about the funds frozen in their real-money accounts. The insolvency is a direct result of the U.S. Department of Justice’s seizure of the domain names of the two online poker rooms as well as the indictment of the company’s founders on charges of money laundering, fraud and illegal gambling.

Madeira Fjord of Norway, which represents shareholders in the poker websites’ parent company, Blanca Games Inc., said in an email to shareholders this week  that it planned to file for bankruptcy protection in Norway after being informed that the latter company had “no cash on hand and no prospects for any cash flow for the foreseeable future.”

The full e-mail, which was posted in a thread on TwoPlusTwo, can be read below:

Since the last meeting of shareholders, there have been a number of developments that affect our Company.

Most importantly, Blanca Gaming has provided notice to our subsidiary Avoine that it is currently unable to make any payments toward its debt obligations. Additionally, Blanca has further advised that there will be no future payments.

Over the past 60 days, the Company has accumulated current debts in excess of $250,000 which are increasing at $100,000+ per month. These obligations are primarily legal and professional fees in Norway.

With no cash on hand and no prospects for any cash flow for the foreseeable future, the Board of Directors is required by Norwegian law to enter the bankruptcy process. The Oslo court will appoint a Receiver who will review the affairs of the Company including the assets, liabilities, and its recent transactions. After a full assessment, the Receiver will make a determination how to enforce any applicable rights, obligations, and obtain the maximum value for its assets in the best interest of the Company.

As the Receiver is a court appointed 3rd party, we can be assured that the Receiver will evaluate all relevant options including any applicable soliciting proposals from interested parties related to the assets of the Company. Funds accumulated through the Receivers’ efforts will be disbursed according to Norwegian law.

As of the date of the filing, the Board of Directors is relieved of duty, and all future matters are in the sole control of the Receiver.

Sincerely,
Madeira Fjord, AS Board of Directors

Meanwhile, sources have reported that the Absolute Poker and UB operations center headquarters in Costa Rica have laid off more than 300 customer support and marketing employees, which totals roughly 95 percent of the staff.

Late last month, the other two online poker rooms indicted by the U.S. government, PokerStars and Full Tilt Poker, reached agreements with the Department of Justice to reclaim their seized websites in an effort to facilitate U.S. poker player withdrawals from their sites. PokerStars has already begun the process of returning players funds while Full Tilt Poker has stated its intentions to do so as quickly as possible.

Absolute Poker and UB, which both reside on the CEREUS Poker Network, have been given the same opportunity, but a deal with the Department of Justice has not been reached. In a press release on April 23rd, Absolute Poker stated that it “believes that the responsible course of action is to review with its attorneys the relevant court filings before taking any action.” The company indicated that it had retained the services of attorneys at Blank Rome LL, but maintained that the top priority was to refund player balances to customers.

Two weeks later, players are still empty-handed with a gloomy outlook at best.

Blanca Games, Inc., which acquired the CEREUS Network in August 2010, issued the following statement to Gamling911.com on Tuesday regarding the company’s future: Absolute Poker and UB ceased their U.S.-facing operations due to recent legal developments in the United States. The company is currently restructuring and will focus its remaining resources on consolidating its non-U.S., rest-of-the-world operation and software business. Unfortunately, this also means an immediate need to downsize and streamline operations significantly at both online poker rooms, with a view of becoming more efficient in the way the business is conducted.

By mid-day Thursday Blanca Games issued a statement on their restructuring as follows:

As previously stated, Absolute Poker and UB ceased their U.S.-facing operations due to recent legal developments in the United States. The company is currently restructuring and is focusing its resources on consolidating its non-U.S., rest-of-the-world operation and software business. In order to have a more efficient and successful future business, an immediate need to downsize and streamline operations significantly at both online poker rooms has been required.  Absolute Poker and UB continue to operate their non-U.S.-facing business.

This decision comes after considerable review and analysis of the impact that ‘Black Friday’ has had on the business as a whole. The workforce has been liquidated, and the process of rehiring approximately 20% of staff in key positions has commenced. All affected employees have been informed of this necessary restructure.

A company spokesperson said: ”We regret that we have been compelled to take these actions.  We have worked tirelessly to create a truly amazing company that is filled with extraordinary people. We have always been and still remain fully committed to our employees and players. At the same time, we are confident that this restructuring will strengthen the company and its future.”

The Company spokesperson also addressed erroneous reports that Blanca has filed for bankruptcy. The apparent confusion over this issue stems from the fact that Blanca recently informed a debt holder, Madeira Fjord, that it was terminating debt payments to, and its relationship with them.  As a result, Madeira Fjord apparently filed a notice of bankruptcy in Norway. This notice has no negative impact upon Blanca, the operating company, or its brands. As stated previously, Absolute Poker and UB continue to operate their non-U.S. facing business around the world.

For non-U.S. players, Absolute Poker and UB have increased their maximum withdrawal limits to $1000 for Visa withdrawals and $500 for all other methods.  The number of transactions being processed per day has been significantly increased as well.  Players are still restricted to one transaction per week, but we are working to return non-U.S. withdrawals to
normal service levels as quickly as possible.

As confirmed earlier this week, the company’s legal counsel is in continuing discussions this week with the U.S. Attorney’s office to formalize an agreement that would facilitate the return of funds to U.S. players.

Stay tuned to Poker News Daily for the latest.