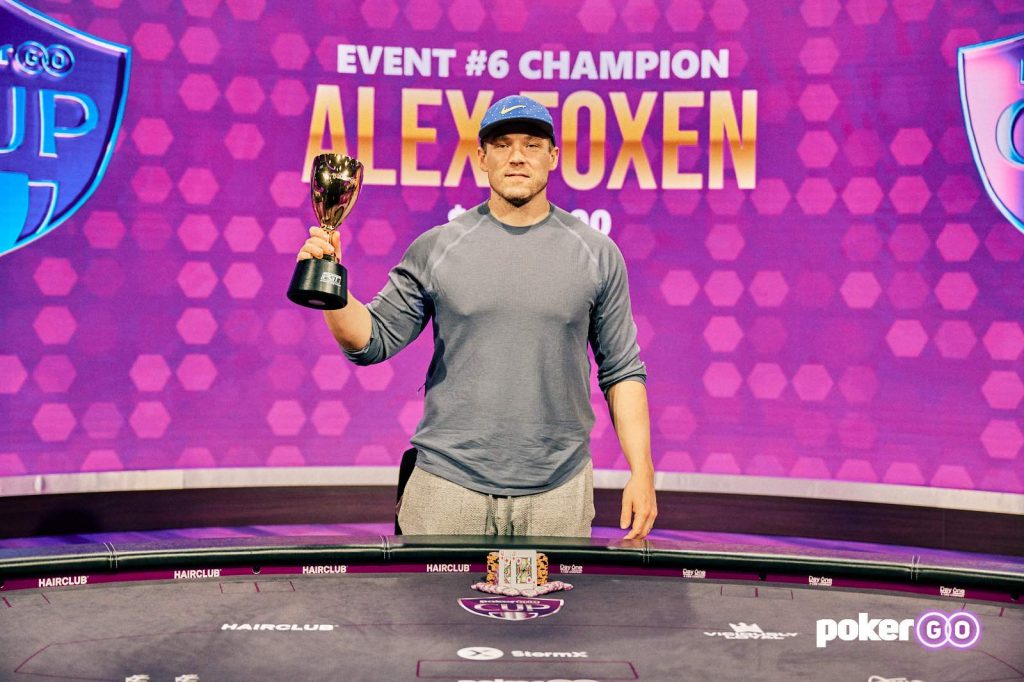 It has been a decent week for the Family Foxen at the 2023 PokerGO Cup in Las Vegas. The better half, Kristen (Bicknell) Foxen has been able to score two final tables over the first half of the roster of events. Topping her, however, has been husband Alex, who took down the title last night in Event #6 and catapulted himself into the second slot on the overall leaderboard for the PokerGO Cup.

31 entries in the $25,000 buy-in tournament came out on Tuesday, which had been whittled down to the final six men come the start of action on Wednesday. Leading the pack was Turkey’s Orpen Kisacikoglu, who had nearly as many chips (3.66 million) as the rest of the final table players combined (3.84 million). However, the players behind those other stacks were tough, with Aram Oganyan, Foxen, Cary Katz, Sean Perry, and Sam Soverel looking to stop Kisacikoglu in his tracks.

It did not take long for the jousting amongst the shorter stacks to begin. Soverel would push in the early action with an A-9 off suit from the cutoff, but Katz would wake up in the small blind with pocket Queens and call. A nine would come on the flop, but there wasn’t a second nine or an Ace in the mix for Soverel as he departed the festivities in sixth place.

Next on the chopping block was the short stack of Perry, who found pocket tens to his liking and pushed all in off the button. Unfortunately for Perry, Oganyan would squeeze his cards to show pocket Jacks, with the ensuing runout coming with nothing for either man to eliminate Perry in fifth place. Oganyan would then do the deed against Katz in a classic race (Oganyan’s A-J off suit against Katz’s pocket fives), taking the hand after an Ace came on the flop to end Katz’s day in fourth.

Down to three players, the action slowed down as the players reassessed the situation. Kisacikoglu was still a massive leader, leaving Oganyan and Foxen to decide who was going to face off with the Turk. That decision would come in a surprising bluff that changed the course of the tournament.

Foxen raised the betting with Big Slick on the button and Oganyan (with 8♥ 7♥) made the call from the small blind to see a 9-7-2 flop. The two men stared stone-faced at each other and checked their options, which saw a ten come to provide straight and spade flush options for the players. The duo once again checked, bringing the drama down to the river.

A river Jack provided Oganyan with a straight, but it also backdoored the flush draw potential that existed on the turn. Oganyan decided to open the action this time for 440K and Foxen, after some deliberation, pounded the pot with a raise to 1.3 million. Strangely, Foxen did not bet the 400K or so that remained in his stack, which seemed to perplex Oganyan. After several agonizing moments, Oganyan believed Foxen’s story and laid down his winning straight to the bluff from the former GPI Player of the Year; he would depart soon afterward in third at the hands of Kisacikoglu.

Down to heads-up play, Kisacikoglu had a massive 3:1 lead, but Foxen went on a run to draw the stacks closer to even. Now, however, something else came into play outside of the action in Event #6. Registration was winding down in Event #7, the final preliminary event before the Main Event, and both Kisacikoglu and Foxen wanted to get in that tournament (overall PokerGO Cup points on the line). Thus, a unique outcome came into being.

The players decided to chop the money remaining in the tournament by ICM, with Foxen taking a $317,040 payday and Kisacikoglu earning the bigger share with $345,460. With the financials taken care of, the duo simply moved their stacks in each hand until a winner was determined. That player would be Foxen, who topped Kisacikoglu when Foxen’s Q-J outlasted Kisacikoglu’s J-6 to end the tournament.

(Nick Schulman finished seventh for $62,500 and Daniel Negreanu finished eighth for $50,000 as a part of the official final table)

With his win in Event #6, Foxen has pulled closer to the top of the overall PokerGO Cup standings. Anthony Hu has utilized three cashes (including one win) to amass 454 points to this mark in the series, but Foxen’s win pushed him into second with 343 points. Every winner to this point during the series is in the Top Ten, but there are four players – Kisacikoglu, Katz, Adrian Mateos, and Erik Seidel – who have pushed their way into contention for the Cup without the benefit of winning a tournament.

The next few days will be critical to deciding who will eventually be the overall champion of the 2023 PokerGO Cup. Event #7 has a final table that features David Peters, Soverel, and Negreanu, and a win from any of those men will push them into the mix for the overall title. Starting today is the Main Event of the 2023 PokerGO Cup, the $50,000 conclusion that should see all the contenders for the Cup involved. That tournament will wrap on Friday with its final table and the player who will take home the $50K bonus and the PokerGO Cup will be determined.