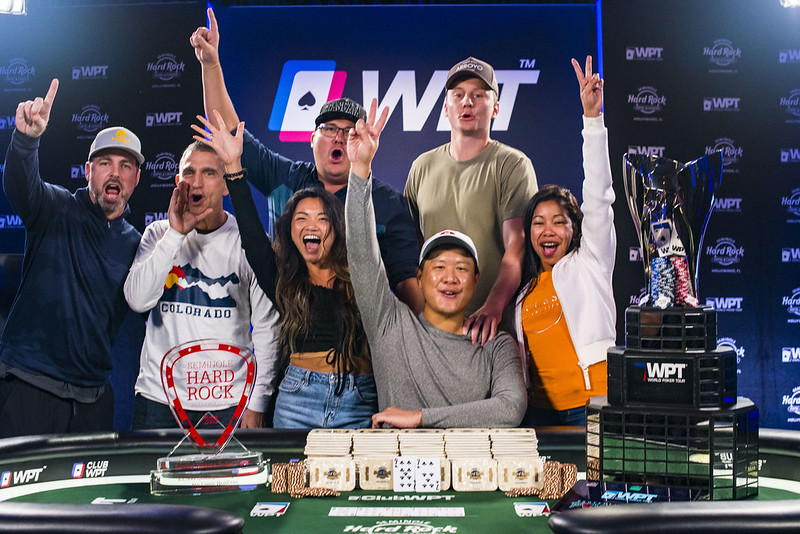 He grabbed ahold of the lead during Tuesday’s action ahead of the final table and he would never let it go. Alex Yen rolled to the championship of the World Poker Tour’s Lucky Hearts Poker Open on Wednesday night, defeating Anton Wigg. The title was the first major championship for Yen in his poker career, earning him just short of a million dollars and increasing his career earnings threefold.

Yen may have been at the helm of the ship for the final table action, but there were still challenges aplenty. Yen held a nine million chip lead over Day Three chip leader Josh Kay, with Wigg right behind Kay for third place. The remainder of the table was in dire straits as their stacks were in the “danger zone” – Daniel Lazrus (7.35 million), Omar Lakhdari (4.825 million) and Nicholas Verderamo (4.425 million).

Yen was active from the start in adding chips to his stack, but for the most part there were only tentative jabs thrown. That all changed with a couple of races between competitors. On Hand 27, one race came when Lakhdari got his final chips to the center against Lazrus, his K♠ Q♠ up against Lazrus’ pocket nines, and the flop cruelly brought another nine for the set. Needing a runner-runner to win the hand, Lakhdari got one card – a ten – on the turn, but blanked out with the King on the river to depart in sixth place.

The second race would come about ten hands later. After Kay opened up the betting, Wigg three-bet the action and Kay moved all in. Wigg made the call and tabled Big Slick versus Kay’s pocket Queens. The flop was favorable for Kay, coming nine high, but the King on the turn turned the fates. A ten on the river did nothing for either player, sealing the hand for Wigg and sending Kay to the short stack; Wigg would finish the job five hands later, mercilessly hitting trip Queens on a Q-Q-9 flop with an off suit K-Q against Kay’s A-J to send Kay out in fifth place.

Only four hands later, the foursome became a trio. Yen would open the action and Verderamo decided it was time to make a stand. Yen wasted no time in calling the bet and tabled pocket Queens against Verderamo’s off suit A-8. No Ace would come to the rescue for Verderamo, sending him to the cage at the Seminole Hard Rock Hotel & Casino in Hollywood, FL, to retrieve his fourth-place money.

Yen and Wigg Battle for the Title

Three handed play would take nearly as much time – 46 hands – as the elimination of three players had taken – 50. Lazrus was valiant in trying to fight off the larger stacks of Yen and Wigg, but time and the cards eventually would catch up with him. Lazrus would get his chips in good against Yen, pocket sixes against Yen’s K-J off suit, but a Jack on the flop switched the lead. Needing one of two sixes in the deck, Lazrus would instead see a five and a nine come on the turn and river, ending his efforts in third place.

Yen began heads-up play with Wigg with more than a 2:1 lead (57.7 million/22.6 million) and he never let his foot off the gas. Although Wigg would at one point fight his way into the lead, Yen was the aggressor throughout the heads-up fight, taking the lead back on Hand 116. The penultimate hand would come on Hand 119, when Yen simply limped in and, after Wigg popped him with a raise, Yen made a smooth call.

The 10-8-6 board did not look dangerous and neither player seemed fazed by it. Wigg fired out a continuation bet, which was called by Yen, and a second six on the turn saw Wigg move his remaining stack to the center. Yen immediately made the call, tabling his 9-7 for the flopped straight. Wigg had been caught, his pocket Queens run down on the flop, and he needed a third lady or a six on the river to eclipse Yen’s work. A 4♦ on the river was not the cure for Wigg, ending his tournament in second place and earning Yen his first major championship.

The victory by Yen moves him into poker’s Millionaire Club. Prior to the Lucky Hearts, Yen had earned “only” around $360K in his 15-year poker career. His previous best finish was at the 2021 World Series of Poker’s Event #28, the $1000 Pot Limit Omaha tournament (third place, $74,239). Now Yen has his name in perpetuity on the WPT Mike Sexton Champions’ Cup and will always be known as a member of the WPT Champions’ Club.