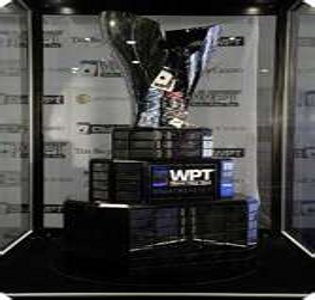 Vanquishing three former World Poker Tour champions – including a former WPT and World Series of Poker World Champion – Asher Conniff broke through to earn his first major championship ever in taking down the WPT World Championship at the Borgata in Atlantic City Wednesday night.

Conniff was in a good operating position as the final table began play on Wednesday afternoon. Situated in second place behind former WPT champion Alexander Lakhov, Conniff had enough contact with the Russian (Lakhov’s 4.105 million chips were within reaching distance of Conniff’s 2.355 million) but also had enough to dissuade others at the baize from trying to get too frisky with him. Brian Yoon (1.925 million), former WPT champion Tony Dunst (1.545 million), Ray Quartomy (1.385 million) and former WSOP and WPT World Champion Carlos Mortensen (650K) rounded out the table as the cards went into the air.

Battling off the short stack, everyone expected Mortensen to be the first casualty of the final day’s play. Instead, “The Matador” demonstrated why he is considered the best player in the world that ISN’T in the Poker Hall of Fame by slowly working his stack before getting a key double up that was on the lucky side. After a Quartomy limp, Dunst popped the action up and Mortensen moved all-in. Quartomy wasn’t up for the fight but Dunst immediately called; once the cards were on their backs, it was a hand that basically played itself.

Mortensen’s all in with pocket tens and two players in front of him was to be expected, but what he didn’t expect was Dunst to be sitting on pocket Kings for the fight. The flop took care of Dunst’s edge, though, coming down 10-7-6 rainbow and leaving Dunst looking for one of two Kings. After a deuce and a trey completed the board, Dunst’s stack was devastated to 470K in chips and Mortensen went to 1.8 million; the dapper Dunst (who always wears a suit and tie to the final table) was able to shed his finery a few hands later when Conniff eliminated him in sixth place and took over the lead.

As Conniff slowly began to pull away from the other four players on the felt, those men were left scrambling to figure out who would stop Conniff. Yoon appeared poised to be the first challenger after doubling up through Lakhov, but Conniff kept the pressure on the table by surrounding himself with more than half the chips in play. That deficit would only increase when Conniff knocked Quartomy out in fifth place exactly 40 hands after Dunst’s departure to push Conniff near the 7 million chip mark.

At this point Lakhov seemed to wake up, earning a double through Conniff before getting even healthier in bumping Mortensen out of the tournament. After Lakhov raised the betting, Mortensen found his moment to push his stack and Lakhov called. Mortensen was in prime position for the double, his pocket tens ruling over Lakhov’s ugly A-6 off suit, and the flop and turn agreed with Mortensen in coming K-7-6-2. An Ace on the river, however, flipped the fortunes of the two men, putting Lakhov in second and ending the run of Mortensen to become the only player to win two WPT World Championships.

Down to three players, Conniff (6.265 million) was crushing Lakhov (2.9 million) and Yoon (2.8 million) and Conniff didn’t take his foot off the gas. He made a hero call against Lakhov when, on a K-9-2-K-2 board with three spades, Conniff check-called on the turn and river to best a Lakhov bluff (Q-10) with two pair (9-7) and take a three million chip pot. Lakhov would immediately turn from that hand to double up through Yoon, who would be eliminated a few hands later by Conniff to set up heads up play.

With more than a 4:1 lead, Conniff never let Lakhov even sniff at the title. Heads up only took 13 hands and, on the last one, Conniff was able to get Lakhov to move all in with the worst of it, Lakhov’s 10-6 against Conniff’s Big Chick (A-Q). When the board failed to hit either man, Conniff would stand the tallest in eliminating Lakhov and winning the WPT World Championship.

With Conniff becoming the latest WPT World Champion, the WPT’s Season XIII schedule has been put to rest. However, if you think that the WPT is going into a bit of a slumber, you would be wrong, Season XIV of the WPT begins TOMORROW with its first event, the partypoker WPT Canadian Spring Championship at the Playground Poker Club in Montreal, Canada. That tournament has a $3500 buy in and two Day Ones, with players having the option to play both if they choose. Don’t expect Asher Conniff to be there, however, as he is still basking in the glow of being the WPT World Champion!