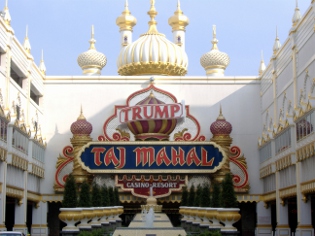 The Trump Taj Mahal Hotel & Casino in Atlantic City closed yesterday after 26 years. Once the poker hub of the east coast, the Taj is no longer owned by the groping Republican presidential candidate Donald Trump, but rather by billionaire investor Carl Icahn’s Icahn Enterprises and is operated by Tropicana Entertainment.

The Taj Mahal came to be in Icahn’s hands after Trump Entertainment Resorts exited bankruptcy in February 2016 (I know it’s surprising that a Donald Trump venture had problems, but humor me here); Icahn was its largest debt holder and agreed to take it on. He had said he was also going to spend $100 million to improve the property, but he never did.

In late 2014, when Trump Entertainment Resorts began bankruptcy proceedings, employees lost their health care and pension benefits. This July, the Unite Here Local 54, which includes over 1,000 staffers of the Taj, including cooks, bellmen, and housekeepers, went on strike to protest their loss of benefits. A month later, Tropicana Entertainment announced that the casino would close, blaming the strike for the Taj’s lack of profitability.

Bob McDevitt, President of Unite Here Local 54, said of Icahn at the time:

How petty. I would never have thought Carl Icahn was so one-dimensional. The great deal-maker would rather burn the Trump Taj Mahal down just so he can control the ashes. For a few million bucks he could have had labor peace and a content workforce, but instead he’d rather slam the door shut on these long-term workers just to punish them and attempt to break their strike. There was no element of trying to reach an agreement here on Icahn’s part; it was always “my way or the highway” from the beginning with Icahn. It is the epitome of the playground bully, who picks up his ball and announces he is going home because nobody else would do it his way. It is truly a shame that such an unscrupulous person has control of billions of dollars.

The Trump Taj Mahal’s famous poker room really became known, according to The Press of Atlantic City, when it became host of the U.S. Poker Championship in 1996. It was the first $10,000 tourney on the east coast and for a number of years was arguably the highlight live poker tournament in the United States outside of the World Series of Poker.

Many poker fans and, really, non-poker fans will remember the Taj in its significant cameo role in the seminal 1998 poker film Rounders.

And that is exactly what was portrayed in the film. In one scene, the New York grinders, including Matt Damon and Edward Norton’s characters, took advantage of unsuspecting tourists. In another, Damon’s character, Mike McDermott, recalls a time he sat down at a table with Johnny Chan for much more money than he could afford and bluffed the two-time WSOP Main Event champ out of a pot.

When the glitzy Borgata opened in 2003, the Taj Mahal’s poker room could not keep up. The Borgata soon became the place to play poker in Atlantic City and casinos in other states kept out-of-state players home. The Taj Mahal poker room closed for “renovations” in February 2015 and didn’t re-open for more than a year, just in time for the strike and the casino’s closure.