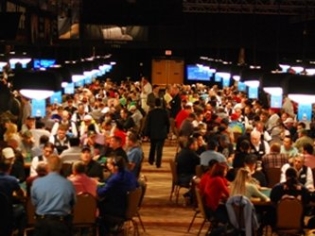 What a summer for Ben Lamb. The Las Vegas poker pro known as “benba” last month followed up a second-place in the $3,000 Pot Limit Omaha event by winning his first World Series of Poker bracelet in the $10,000 Pot Limit Omaha Championship. He then took eighth place in the $50,000 Poker Player’s Championship this week for his third final table of the series. In all, Lamb has collected more than $1.3 million during the seven-week marathon in Vegas, placing him second in the Players of the Year race behind Phil Hellmuth.

Lamb bagged up 188,925 chips at the end of Day 1b of the WSOP Main Event on Friday to place him atop the 626 players that survived the day. A total of 985 players participated on Friday, and Lamb was among the leaders right out of the gate. He credited his good fortune on what he called a “good” table draw, and was even able to pick up a sizable pot at showdown with just jack-high before the dinner break to increase his stack to 102,000 (up from the starting stack of 30,000) .

Lamb then won a massive pot against another 2011 bracelet winner, Team PokerStars Pro Max Lykov, to eclipse the 200,000 mark. On a flop of Kc-Jc-Js, Lykov led out for 2,700, Lamb raised to 8,500, and Lykov called. The 10s landed on the turn, and Lykov check-called a bet of 10,200 from Lamb. The river was the 4d and Lykov checked again. This time Lamb fired out a bet of 30,000, and Lykov through awhile before tossing in a call. Lamb showed Qc-9d for a straight and the winner to take control of the chip lead.

Lamb currently sits second overall on the Main Event leaderboard behind fellow Las Vegas native Fred Berger, who bagged 209,500 chips on Day 1a. Lamb will have his sights set on surpassing his previous best result in the WSOP Main Event, a 14th place finish in 2009 for $633,022.

Many others weren’t as fortunate. 2010 November Niner Michael Mizrachi hit the rail before the day ended, and he was joined by Eric Froelich, Andre Akkari, Ashton Griffin, Justin “BoostedJ” Smith, Tuan Le, Erica Scheonberg, and Nicolas Levi, among others. Mizrachi got off to a slow start and was never able to recover. His day ended when he moved all in with Kc-10c and couldn’t outflip the pocket nines of Robin Fisher.

Here’s a look at the top 10 stacks from Day 1b of the WSOP Main Event:

The field of 985 on Day 1b was down significantly from the 1,489 players that participated on the same day last year, but WSOP officials are expecting massive turnouts for Days 1c and 1d this weekend. So far, a total of 1,875 players have taken to the felts, but don’t be surprised to see that number hit 6,000 by dinner time Sunday.

Day 1c gets underway at noon PST on Saturday. Stay tuned to Poker News Daily for ongoing coverage of the World Series of Poker Main Event in Las Vegas.