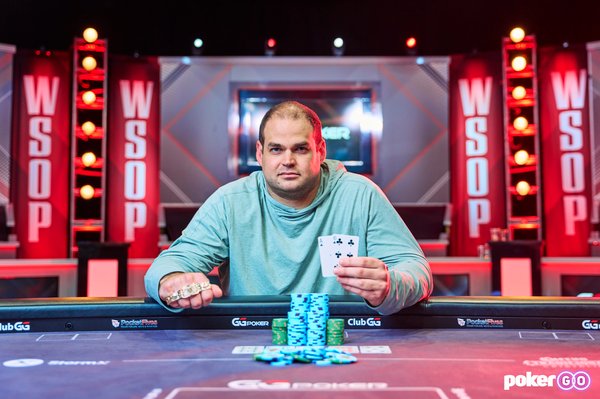 The long, summertime slog of the 2022 World Series of Poker has come to an end. Yes, there was still some business to take care of after Espen Jorstad captured poker’s World Championship on Saturday, but it took place after all the cameras went away. The final bracelet of the 2022 WSOP was the 2022 Tournament of Champions, and it was taken home by one of the online champions from the past year, Benjamin Kaupp.

The 2022 WSOP Tournament of Champions was another attempt at reviving the event that has been contested in one manner or another since 2004. Back then, it was a single table nine person Sit and Go, eventually won by Annie Duke over Phil Hellmuth for a winner-take-all $2 million. The next year, WSOP officials built the field through the final table of the 2005 WSOP Championship Event and whoever had won on the burgeoning World Series of Poker Circuit (Mike Matusow would win $1 million of the $2 million prize pool, with the final table splitting up the other million).

In 2006, the field again expanded for the tournament, this time with the final table of the 2005 WSOP Championship Event, the eleven winners on the WSOP-C, and several sponsor exemptions. The move to put in sponsor exemptions was quite controversial at the time, but it actually turned out to be a battle for the ages as Mike Sexton and Daniel Negreanu played for over 12 hours heads up before Sexton won (I know, I sat there watching it!).

After that epic battle, the WSOP for unexplained reasons did not hold another version of the event until 2010, when they made it a true “All-Star” game. The (at that time) 521 bracelet winners in WSOP history were put on a ballot and the fans chose their nine selections for the final table. Only 20 were put into the tournament by the WSOP, with the previous champions (Duke, Matusow, and Sexton) being grandfathered in and the reigning WSOP World Champion, Joe Cada, and the WSOP-Europe champion, Barry Shulman, joining them. Huck Seed would win the tournament over Howard Lederer, with Seed taking home a $500,000 payday.

Once again, the WSOP did not hold the Tournament of Champions the next year…nor in 2012…nor through the Teens. It would not return until this year’s last battle at the WSOP.

Strangely enough, the players seemed to come out in droves for the latest incarnation of the WSOP Tournament of Champions. For 2022, any player in the previous year who had won a bracelet at the WSOP in Vegas, any player that won a ring on the WSOP-C, and any player who won in the online areas that the WSOP has ventured into were eligible to participate. The total number of players? 570. The number who showed up for action? 470, or more than 82% of those who were eligible.

They were down to sixteen players on Wednesday night, with the $1 million prize having already handed out some cash to the 44 players who were eliminated. The top player would earn a $250,000 payday, and there were some serious contenders in the crowd. Gianluca Speranza would drop out in ninth place, while Ali Eslami departed in fifth place. But the tournament would change appearances with four players remaining.

All in for his tournament life, Kaupp was in dire straits with his pocket nines against the pocket Kings of Ryan Messick. The flop was clear for Messick, but the turn brought the one card he did not want to see – a nine, giving Kaupp a miraculous set. Once the river blanked out, Kaupp went into a lead he would never relinquish.

Kaupp caught a bluff from Raul Garza during three handed play and would eventually stretch out to a 3:1 lead over both of his opponents’ stacks added together. Kaupp administered the coup de grace to Messick, his K-10 flopping two pair against Messick’s A-4, and went to heads-up against Garcia with 12.55 million chips to Garza’s 1.55 million. Although Garza would get one double up on the third hand played, there was not a miraculous comeback in the cards.

On the final hand of the 2022 WSOP, Garza pushed all in and Kaupp went through the theatrics of asking for a count. Once he got that info (2.15 million), Kaupp made the call, and the cards went to their backs:

The 10-8-2 flop missed both players, but Garza was still alive as a second ten came on the turn. Looking for a King or a Jack, Garza instead saw a five on the river, ending the tournament with Benjamin Kaupp, who won a $200 online event on WSOP Pennsylvania to earn his entry, taking home the title of Tournament of Champions victor and adding his name to the prestigious history of the event.