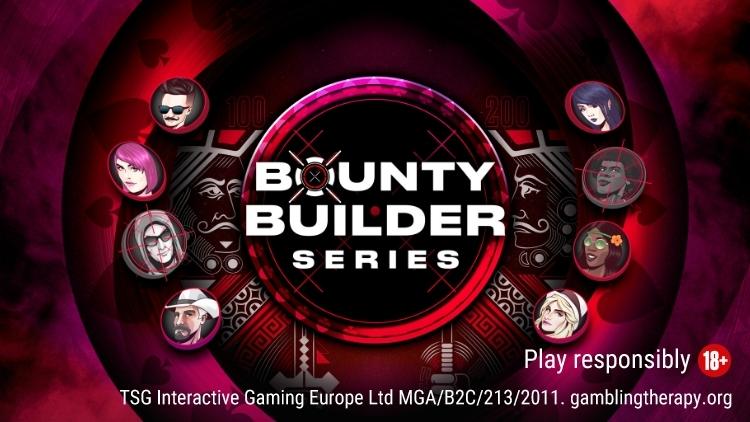 The Bounty Builder Series returns to PokerStars next week, scheduled for February 27 through March 13. There will be 196 tournaments across the two weeks, with over $25.5 million in guaranteed prize pools.

The two Main Events have buy-ins of $55 and $530 and guarantees of $1 million and $2 million, respectively.

As is apparent by the name of the tournament series, every single event is a bounty knockout tourney. Progressive bounty, to be exact. In a progressive bounty tournament, each player has a bounty on their head. If you eliminated someone from the competition, you receive half of their bounty in cash, while the other half of the bounty gets added to your own bounty.

Thus, as you knock players out, the prize on your head gets more valuable, making you a juicier and juicier target.

As an example, the first event of the Bounty Builder Series, the buy-in is $100 + $9 (the $9 is kept by PokerStars as their fee/rake, so don’t worry about it for the sake of understanding the structure). Of the $100, $50 goes directly to the prizepool. The other $50 is the bounty on each player. When you knock someone out, you get $25 put right into your PokerStars account, while the other $25 is added to your bounty. So, after your first elimination, you have already won $25, while your bounty is now $75.

The obvious benefit to a progressive bounty tournament is that you can turn a profit without actually making the money. Of course, if you have knocked out enough players so as to profit (or get one or two big bounties), there’s a decent chance you will make the money, anyway.

People also enjoy bounty events because they tend to be more action-packed. Players often get aggressive, gunning for each other’s bounty. And if you are fortunate enough to build up your own bounty, you may find yourself in lots of active pots.

While most of the events use half the buy-in for the prizepool and half for the bounty, there are some variations. For instance, in the “Big Knockouts” format, three-quarters of the buy-in is the bounty and only a quarter goes to the prizepool, thus making it almost imperative that you eliminate opponents.