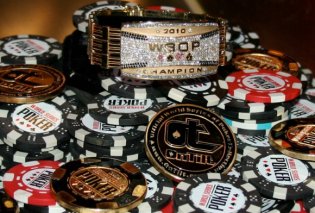 For the third straight day, a former bracelet winner has finished atop the chip counts at the World Series of Poker Main Event. California-based poker pro Kevin Song joined Fred Berger and Ben Lamb in that regard by amassing a stack of 163,325 chips on Day 1c Saturday. Song, who won a $2,000 Limit Hold ’em Event in 1997, was among the 1,360 survivors that advanced to Monday’s Day 2a, which will combine the players who made it through Days 1a and 1c.

An impressive total of 2,181 players took to the felts on Saturday, a larger turnout than Days 1a and 1b combined. That brings the total number of Main Event entrants to 4,056, with Day 1d still set to get underway on Sunday. The tournament staff is preparing for at least another 2,000 players to play on Day 1, with the possibility that the total entrants could hit 7,000 for the second straight year.

Saturday brought seven former WSOP Main Event champions to the Rio, including last year’s champion Jonathan Duhamel, who took his seat at the ESPN Featured Table. The other former world champs in attendance were Joe Cada, Phil Hellmuth, Dan Harrington, Bobby Baldwin, Scotty Nguyen, and Chris Moneymaker, who was the only member of the esteemed club to hit the rail on Saturday. The 2003 champ ran a bluff into an opponent’s set of tens, leaving him empty handed for the eighth straight year at the Main Event.

Hellmuth currently leads the WSOP Player of the Year race but had a rough time of it on Saturday, ending the day with just 11,800. He had dropped as low as 4,000 but was able to double when his A-K held up against an opponent’s K-J to stay alive. He’ll need to bounce back on Day 2 in order to fend off Ben Lamb, who is second in the standings and second overall in chips in this event heading into Monday.

A few celebrities and an NBA All-Star were also in attendance Saturday. The always entertaining Ray Romano and Brad Garrett got the day off to a humorous start with the traditional announcement of “Shuffle Up and Deal,” accompanied by Garrett jokingly proclaiming, “we’re both here to meet lots of men!” Garrett’s sprits remained high throughout the day as he finished with 59,775, nearly double the starting stack of 30,000. Romano, though, was eliminated in the second level of the day.

Boston Celtics forward Paul Pierce was among the early chip leaders on Saturday. The man known as “The Truth” increased his stack to nearly 100,000 before dropping off to 62,750 to finish the night. Pierce was donning his 2007-08 NBA championship ring at the table and appears poised to make a run at another piece of jewelry in the coming weeks.