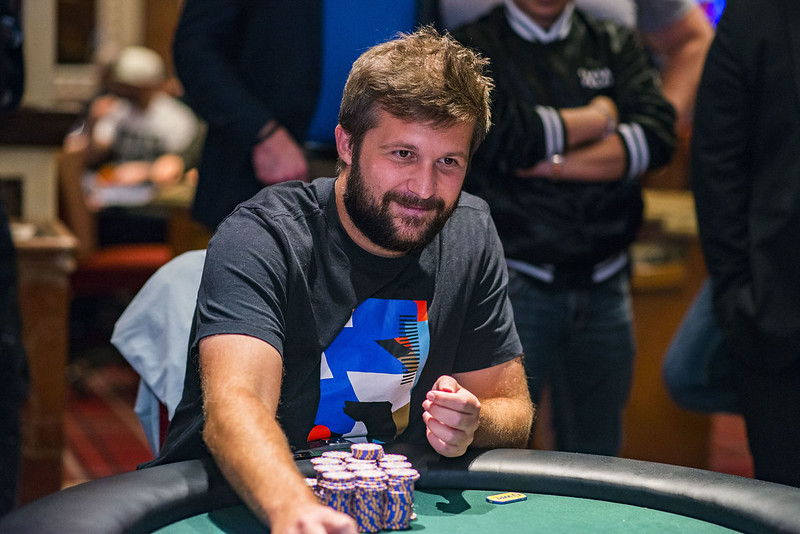 “Bunch of emotions, very tired, happy,” Eveslage told WPT.com afterward. “Before I hit the ace on the river, I felt resigned to defeat, then it’s just like ‘oh, I win.’”

World Poker Tour final tables are normally six-handed, but this one began seven-handed on Sunday. It became the “official” final table when Zach Donovan was eliminated in seventh place. And that six-handed final table was one of the longest you will ever see, requiring nearly 400 hands to complete.

It took 86 hands for David Kim to be 86’ed from the event. His A-J dominated Michael Gathy’s A-8 pre-flop, but all the money got in after turn and to Kim’s dismay, his opponent had flopped two pair. The river failed to produce a Jack and that was it for Kim.

Eveslage knocked out Albert Calderon in fifth place on the 100th hand of the official final table. Again the money went into the middle on the turn and again the winner flopped two pair, but this time it was the better pre-flop hand that did it, A-Q for Eveslage versus A-T for Calderon. A Ten fell on the river, but it didn’t matter.

Brian Kim was the next one out, getting his chips in pre-flop with A-Q against Eveslage’s pocket Tens. Both players hit the flop hard: A-Q-T, but that obviously favored Eveslage. Kim was unable to improve and was eliminated in fourth place. That was a sweet sight for Steve Buckner, who was holding onto the short stack and made a money jump of at least $128,000.

Buckner not only held on, but thrived after that, eventually moving into the chip lead for a little while. When Eveslage knocked out Gathy in third place, he went into heads-up play against Buckner with a 17,875,000 to 10,575,000 chip advantage.

Eveslage immediately extended his lead and looked like things could be over quickly, but Buckner roared back, doubled-up, and took a 2-to-1 chip lead of his own. Buckner continued his run, getting his stack to over 23 million and then nearly 25 million by hand 300.

Undeterred, Eveslage began chipping up and had soon pulled to about even. It then went back and forth like heads-up matches in major tournament often do, neither man, Buckner in particular, able to put the other away. Even fewer than 20 hands before the end, Buckner had a 3-to-1 chip lead, but in poker, we all know things can change quickly.

In an amazing Hand #390, the men were almost dead even in chips. Eveslage moved all-in with 9♣-4♣ pre-flop and Buckner made the call with J♠-T♥. Even if the player who had more chips lost the hand, the tournament was effectively over, as it would require an improbable series of double-ups to get back in it.