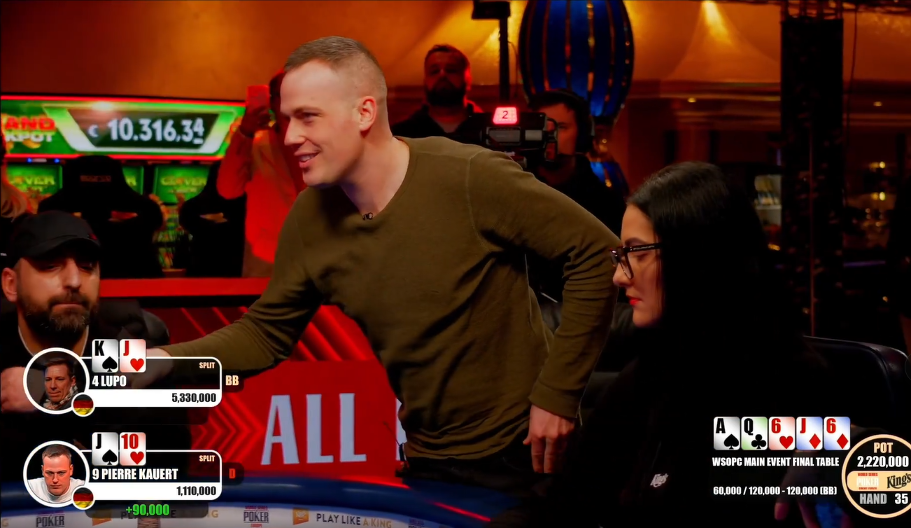 The latest poker controversy has dropped: a split pot at the final table of a World Series of Poker (WSOP) Circuit event somehow resulted in player being eliminated from the tournament.

The incident occurred when the WSOP Circuit Rozvadov Main Event at King’s Casino – the home venue for WSOP Europe – was down to five players. Pierre Kauert moved all-in for about a million chips with J-T (suits are unimportant in this hand) and was called by a man named Lupo, who had K-J and enough chips to cover Kauert’s bet.

The flop was A-Q-6, giving both players a gutshot straight draw. The turn was a Jack, which gave both players a pair, though Lupo had the better kicker. And it was that King kicker that everyone had in their minds when the river brought another 6.

So now both players had two pair, Jacks and Sixes, with an Ace kicker from the flop. The graphics during the livestream clearly showed that the players had chopped the pot, but as soon as that river card came down, Kauert stood up, gave fist bumps, handshakes, and hugs, and exited. Nobody, not a single player, announcer, dealer, nobody, seemed to notice that the pot should have been chopped. Everyone clearly had Lupo’s kicker in their heads and thought it played.*

*The one exception to this statement might have been eventual winner “Mandrake,” who, at the very end of the video, seemed to be adding things up in his head, as if he did notice something looked off. He obviously never said anything, though. He also could have just been counting chips.

King’s Resort streamed the event on its Twitch page, but for whatever reason (insert side-eye here), the four-hour video of the final table that is currently available to watch on demand starts at some point AFTER Kauert was eliminated. Fortunately, some avid poker-watchers were able to capture the hand and post it on social media.

Also, to his credit, King’s Resort poker director Federico Brunato posted the hand on his personal Facebook page, along with a lengthy response to the ensuing controversy.

“I am glad to have it documented on the livestream as it is something that happens very often during the games and is not talked so much about,” Brunato said. “With this post I want to raise awareness and give official piece of advice to our poker community.”

He explained that all of the casino’s dealers are highly trained and the dealer of that hand, Sona, has been with King’s Resort for six years. She has dealt countless hands and, like everyone, is human and can make the occasional mistake. Brunato said that it is incumbent upon everyone to at the table to read their hand and reiterated that it was unfortunate that nobody caught the error, not even the two players involved in the hand.

“The hand was supposed to be a split and we can now only guess how it would turn out in the Main Event path of Pierre Kauert, perhaps he would now be crowned a champion with a Golden Ring, perhaps he would be eliminated in the next hand.”

In answering questions about whether or not something can be done to remedy the mistake, Brunato pointed readers to WSOP Rule #76: “The right to dispute a hand ends when a new hand begins.”

“To take from this I strongly advise the poker community to not criticize other peoples’ mistake and not to try and find guilty, instead learn from this, know your rights and follow your game as every single occasion is individual in its own way,” Brunato concluded.