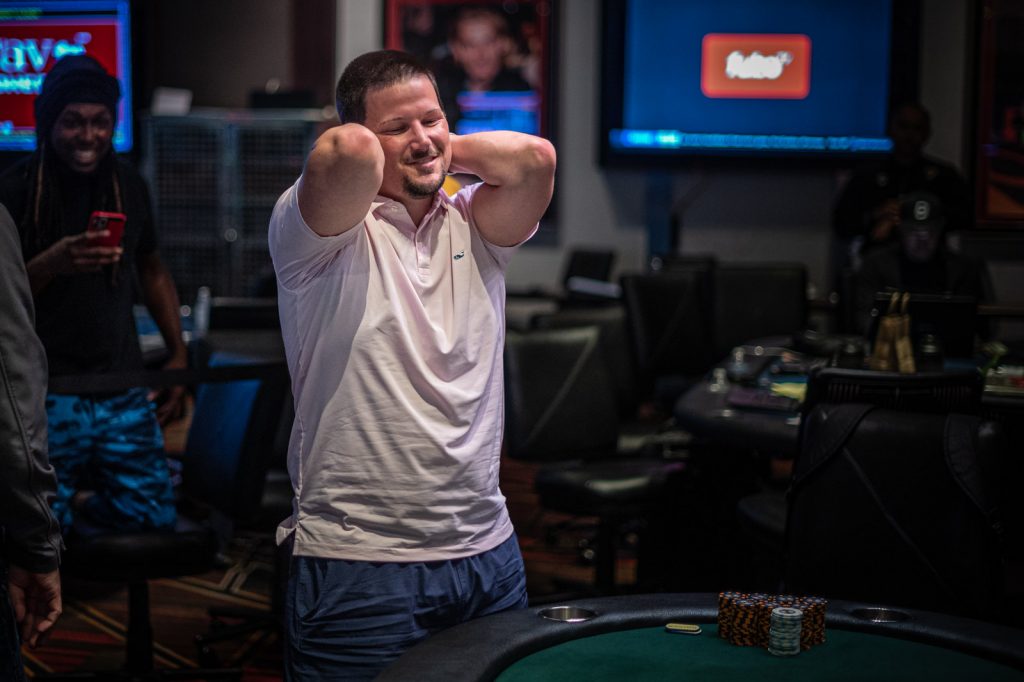 In a six handed final table that lasted well over 260 hands and almost eight hours, Corey Wade was the last player standing from the 1165 entry field in Tampa, FL. At the World Poker Tour’s stop at the Seminole Hard Rock Hotel and Casino in the “City of Champions,” Wade was able to come off the mat to defeat Fred Paradis and capture the title. In winning the latest WPT title, Wade went home with more than $440,000, which also includes a chance at the WPT World Championship this December.

Starting With a Lot of Work to Do

To say that Wade had a lot of work to do to win the title is a massive understatement. There was only one player with fewer chips than his 6.55 million stack, Seth Berger’s 5.025 million in holdings, so it looked bleak for Wade. David Tuthill (9.85 million), Paradis (11.075 million), Brock Wilson (12.1 million) and chip leader Steven McKoy (13.35 million) were all ahead of Wade.

Even with the major chip disadvantage, Wade and Berger were only a double up from getting back in the game. Thus, the players came back to the felt at the Hard Rock in Tampa at high noon and treaded lightly, feeling out their opponents and what their intentions in the early going would be. On Hand #19, Wade found that double up that he needed in a very dramatic hand.

After Tuthill raised from the cutoff, Wade would push his remaining stack to the center for roughly 4.5 million. Tuthill made the call and, once the cards were turned up, the race was on:

The drama ended essentially on the flop. An Ace was in the window, pushing Wade to the lead in the hand. Needing only to dodge the two tens in the deck, Wade saw a Jack and a six hit the turn and river before scooping up the pot of more than ten million chips.

While Wade was climbing from the basement, Wilson was putting distance between him and the field. By the end of the first level of action, he had stretched out to nearly 20 million in chips, with Wade his closest competition. The six men would play over 100 hands before the first player would depart, and it came as a massive cooler.

After Wilson opened from under the gun on Hand #131, Tuthill shoved his stack for over seven million off the small blind. In the big blind Paradis, who would need a massive hand to make the call, did just that. That was enough for Wilson, who tossed a pair of Jacks to the dealer face up as Paradis and Tuthill showed their goods:

Tuthill’s bad fortune – to have the cooler for Wilson’s Jacks, only to be coolered himself by Paradis’ Aces – would change the leaderboard. The board ran out Queen high (for the record, Wilson would have hit a set with his Jacks on the flop), sending the 18.2 million chip pot across the felt to Paradis. Unfortunately, there had to be a loser in the hand, and it was Tuthill; he had to take the walk from the felt to the cage to collect his $130,000 sixth place earnings.

The departure of Tuthill seemed to open up the action. Only nine hands later, Wade took down Berger, his Queens holding up over Berger’s A-8, to get back into second behind Paradis. McKoy’s time at the final table came to an unsatisfactory conclusion for the former chip leader after shipping his chips with a K-Q off suit against Wade’s pocket sevens preflop – the Jack high board brought him no help as McKoy was out in fourth.

A Rare Occurrence on the WPT

Through the first three eliminations, Paradis had been able to rocket to the front. His 28.2 million in chips was almost even with both Wilson and Wade added together. That chip edge would disappear on Hand #187, however, when Wilson (pocket Kings) doubled up through Paradis (Q-8) on a Queen high board. This led to something that is rarely seen on the WPT: a deal struck between the players.

Technically, deals are not done on the WPT IF the tournament is a part of a streamed broadcast or filmed for later broadcast as a part of the Season XX schedule of the WPT (to maintain competitive integrity). This particular tournament, however, was neither of those. As such, the players were able to negotiate a change to the payout structure, apparently based on the chip stacks of each player at that mark of the tournament. After the negotiations, the payouts were adjusted as follows:

The three men still played hard, even though they would basically earn the same payout. Wilson was the first to go at the hands of Wade, then Wade and Paradis battled it out for 76 hands to determine the champion. On the final hand (Hand #266), Wade three bet the action and Paradis moved all in, which Wade called:

The A-Q-10 flop hit both players, but Wade was still behind and looking for help. That help didn’t come with the five on the turn, and Paradis was looking to get the massive double up that would essentially lock up the tournament for him. Instead, another Lady – the Q♠ – spiked the river to give Wade unlikely trips, the hand, and the championship of the WPT Seminole Hard Rock Tampa Main Event.