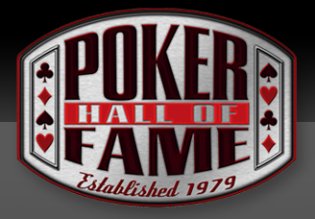 On Monday night just before the start of heads-up play in the 2010 World Series of Poker (WSOP) Main Event, former Main Event champ Dan Harrington and eight-time bracelet winner Erik Seidel were inducted into the Poker Hall of Fame. The two members of the Class of 2010 received a commemorative trophy and spoke for about five minutes apiece to the sold out house at the Penn and Teller Theater. The entire event took about a half hour.

WSOP Vice President Ty Stewart started the festivities by calling attention to the attendance of players like Doyle Brunson and Phil Hellmuth. Stewart also revealed that a “Chip Reese Rule,” which would set an age requirement for entry, may take shape in 2011. Nolan Dalla gave the introductory comments for Harrington, whose “Harrington on Hold’em” series can be found on the bookshelves of top players and amateurs alike around the world; it’s been translated into 17 different languages.

After reviewing Harrington’s accomplishments, Dalla, the WSOP’s Media Director, told the crowd, “This would be a remarkable poker resume for any player over an entire lifetime, but when you consider that Dan Harrington participates in only a few events, his accomplishment is truly staggering.”

Harrington added that the Mayfair Club played an integral role in his development as a poker player. In fact, Seidel is also a product of the New York institution. Harrington recalled his involvement with the Mayfair: “I did not find it; it found me… This club consisted of great game players. They were world champions in backgammon, bridge, and chess. However, they were just dying to learn how to play No Limit Hold’em. I had paid my dues at the World Series of Poker, so I had an edge on them.”

Stewart then introduced Brunson, who lauded Seidel’s presence on the felt: “The thing I’ve admired most about Erik is his demeanor at the table. I think he reminds me of Chip Reese and that’s the biggest accomplishment I can give anyone.” Seidel has eight WSOP bracelets, $10 million in tournament earnings, 142 live tournament cashes, and 19 first place finishes. He’s a true class act.

Seidel, donning a patch for his home site of Full Tilt Poker, told the crowd, “There have been so many people who have influenced me throughout the years, but the one who stands out is Howard Lederer. No one has had more of an impact on me throughout the years.” Lederer and his wife were on stage along with the likes of Jack Binion, Greg Raymer, Dennis Phillips, and Gavin Smith. By the way, it’s Seidel’s birthday weekend and his two daughters flew cross-country in support of their father.

Then, 2010 WSOP Player of the Year Frank Kassela gave the “Shuffle up and deal” command around 8:30pm local time. Kassela congratulated Seidel and Harrington on their Poker Hall of Fame membership and said the most exciting four words in poker. Keep it tuned to Poker News Daily for the latest.