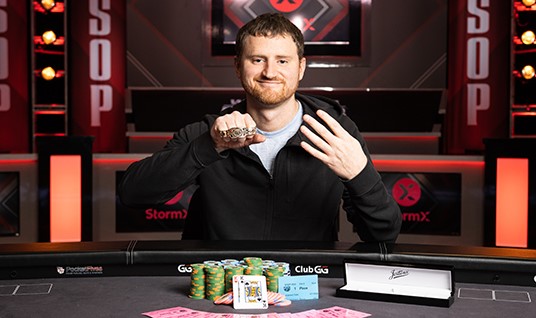 If you will remember last week when we talked about the 2022 World Series of Poker Player of the Year race, you should recall that I said, “this entire list could change in a couple of weeks.” I was wrong…it only took ONE week for it to be completely upended, with a new overall leader and some other names poking into the Top Ten that should contend over the remainder of the schedule.

There’s a New Sheriff in Town

The Top Five of the 2022 WSOP POY has completely shifted, even after one week of activity. Taking over the #1 slot on the leaderboard is David Peters, who was the victor in the second tournament on the WSOP schedule, the $100,000 High Roller Bounty No Limit Hold’em event. He has continued to add points to his total since then, including two more final table finishes. One of those was in a non-High Roller tournament, the $3000 Six Handed No Limit Hold’em event, where he finished in fifth place.

All the work Peters has done has earned him 2222.30 points, and it barely ekes him into the POY lead. Daniel Weisman has NOT been playing in the High Roller events, so he is making all his finishes count. To Sunday, he has eight cashes at the 2022 WSOP, including ‘The Housewarming,’ the MONSTER STACK, and the MILLIONAIRE MAKER. Along with his bracelet win in Event #30, the $1000 Eight Handed Pot Limit Omaha tournament, Weisman has nearly matched Peters step for step in garnering 2208.79 points.

So where did the former leader drop to? Jake Schindler has not cashed in another tournament since his victory in the $50,000 Eight Handed No Limit Hold’em even on June 6. Therefore, his point total has stayed the same – 1842.34 points, which puts him in fourth place on the ladder. Tucked in right behind him is Chad Eveslage, who has earned 1651.24 points in the POY battle.

There is a potential for history lurking in the second half of the Top Ten. The defending World Champion, Koray Aldemir, is ranked sixth at this point in the WSOP with 1524.94 points. Aldemir has been racking up points in both High Roller events (deep runs in the $25K, $50K, and $100K High Roller tournaments) AND has been active in the cheaper events. In the history of the WSOP POY, only one player – Greg Merson (2011) – has been able to win the World Championship and earn the Player of the Year award in the same year. While it might not be the same thing, should Aldemir win the POY title the year after he wins the Championship Event, it would still be impressive.

Another player’s run toward the POY has been equally surprising. Canada’s Thomas Taylor has clawed his way into the Top Ten with 1432.64 points. The impressive thing about Taylor’s run is that only ONE of the tournament cashes that he has had has been in an event with higher than a $3000 buy in. Taylor has been able to cobble together six cashes so far and, with another half of the WSOP to go, is in prime shape to be a dark horse in the POY discussion. As of Sunday, this is the Top Ten in the 2022 World Series of Poker’s Player of the Year race:

We have only hit the 42nd event on the overall WSOP schedule for 2022. There’s still another 46 tournaments left to go, including the $50,000 Poker Players’ Championship and the $10,000 Championship Event. We will repeat what we said last week – when we check back in on the standings next Sunday for the 2022 WSOP Player of the Year race, the reason we are doing it is because the standings have completely changed again.