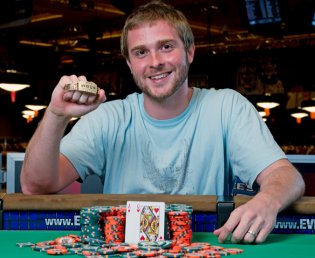 In action that ran into the early morning hours at the Rio in Las Vegas, Dean Hamrick and Ian Gordon took down their first World Series of Poker (WSOP) bracelets.

In Event #42, a $1,500 No Limit Hold’em event, 25 players came back from the original 2,521 runners to play down to a champion. Top players such as Humberto Brenes, Mike Sowers, MMA fighter Mike Swick, and Poker News Daily Guest Columnist Bernard Lee all came back for action on Day 3. Sowers and Lee would not survive the early action, departing the tables in 25th and 21st place, respectively.

Down to two tables, Brenes began to get most of the attention. Unfortunately, the hubbub was from WSOP tournament directors. On two separate occasions, WSOP officials were called because of actions by the Costa Rican poker pro, with the second occurrence earning him a one-hand penalty for trying to influence action at the table. Brenes was unable to get much going during Day 3 and left the event in 16th place.

Roughly three hours after Brenes’ departure, the final table was determined when Swick was eliminated in 10th place at the hands of Thomas O’Neal. A veteran of “The Ultimate Fighter” and currently in the UFC welterweight stable, Swick has also dabbled in poker. Not only was his cash for $34,748 his best ever at the WSOP, it was also the third in the money finish of his career.

O’Neal was the chip leader in the early going, but Niccolo Caramatti was able to work his way into the lead. Caramatti was responsible for the elimination of three of the first four players at the final table, but O’Neal hung around. Hamrick derailed Caramatti’s run, as over the span of two hands, Caramatti’s stack ended up in his hands. After Hamrick dispatched Ian Wiley in third, the heads-up match was set.

Over the span of the next three hours, O’Neal and Hamrick sparred, with O’Neal working his way out to a 4-1 lead. O’Neal was unable to finish his opponent off, however, and Hamrick worked his way back into the chip lead. In a tough final hand, Hamrick limped from the button only to face a raise to 700,000 from O’Neal. Hamrick moved all-in and O’Neal made an immediate call. Tabling their cards, O’Neal held A-9 to Hamrick’s A-Q. An ace came on the flop, but no nine was in the cards for O’Neal, eliminating him from the tournament and giving Hamrick, who was sweated by defending Main Event champion Joe Cada, his first WSOP bracelet:

One of the most watched events in the Rio on Friday was the $10,000 HORSE World Championship, which featured several top poker names among its 23 remaining players. Leading the field was Carlos Mortensen, but such notable names as Scotty Nguyen, Brian Townsend, Cuong Do, Todd Brunson, Marco Traniello, and Nick Schulman were in hot pursuit. Little did anyone know that this final table would also stretch into the early hours of Saturday and feature an unlikely victor.

Several top players including WSOP Player of the Year contender Allen “Chainsaw” Kessler, Al Barbieri, Nguyen, Brunson, and Robert Mizrachi were eliminated in the early going. Tension was high among the survivors, with one of the most prestigious WSOP bracelets and $611,666 up for grabs.

Once Townsend was eliminated in tenth place at approximately 8:00pm PT, WSOP officials requested that, after the next elimination, the players delay final table play until Saturday afternoon to avoid playing into the wee hours of the night. After some intense discussion, the decision was made to continue until a champion was determined.

When Scott Fischman was eliminated in ninth, the official final table was set and started just after 10:00pm. Matt Glantz took the early advantage, although Ian Gordon appeared to keep pace with him. More of the top names – and favorites to win the championship – disappeared through the early morning, including Mortensen, Schulman, and Glantz. By 4:00am, there were still three contenders for the crown – 2010 bracelet winner Richard Ashby, Eugene Katchalov, and Gordon.

Over the span of the next hour and a half, Gordon began to jump out to a lead. Ashby dumped Katchalov in third place to set up what would be a quick heads-up match. With the blinds reaching astronomical levels during the Hold’em segment of the tournament, Ashby put his remaining chips in the center while holding a suited A-J. Gordon held pocket nines and, once no saving cards came for Ashby, Gordon earned the HORSE bracelet:

There will be one final table when play starts on Saturday at the WSOP. In the $2,500 Mixed Hold’em tournament (Event #44), Jarred Solomon is the chip leader with 748,000. There are a few notable names looking to derail him from his march to the title, as Full Tilt Poker pro Gavin Smith sits in second with 745,000 in chips, Daniel Idema has 237,000, and WSOP Circuit mainstay Dwyte Pilgrim is stacked with 196,000.

Two tournaments held their first day of play on Friday, with Event #45, a $1,500 No Limit Hold’em tournament, drawing 3,097 players. According to the WSOP chip totals, 400 players remain, with Will “The Thrill” Failla holding the chip lead at 156,000. Event #46, $5,000 Pot Limit Omaha High-Low, drew 284 players and played down to 130 at the end of action on Friday. Steve Chanthabouasy is the chip leader, but such names as Mike Matusow, David “DevilFish” Ulliott, Tony Cousineau, “Miami” John Cernuto, and Barry Greenstein all are in the top 10.

Saturday will mark the beginning of two more tournaments, with another $1,000 No Limit Hold’em event kicking off at Noon. Event #48, a $2,500 Mixed Game tournament featuring the same Eight Game format of the Player’s Championship, will start at 5:00pm and should draw a strong starting field. With five tournaments in action around the Rio, the WSOP should be a busy place throughout Saturday.