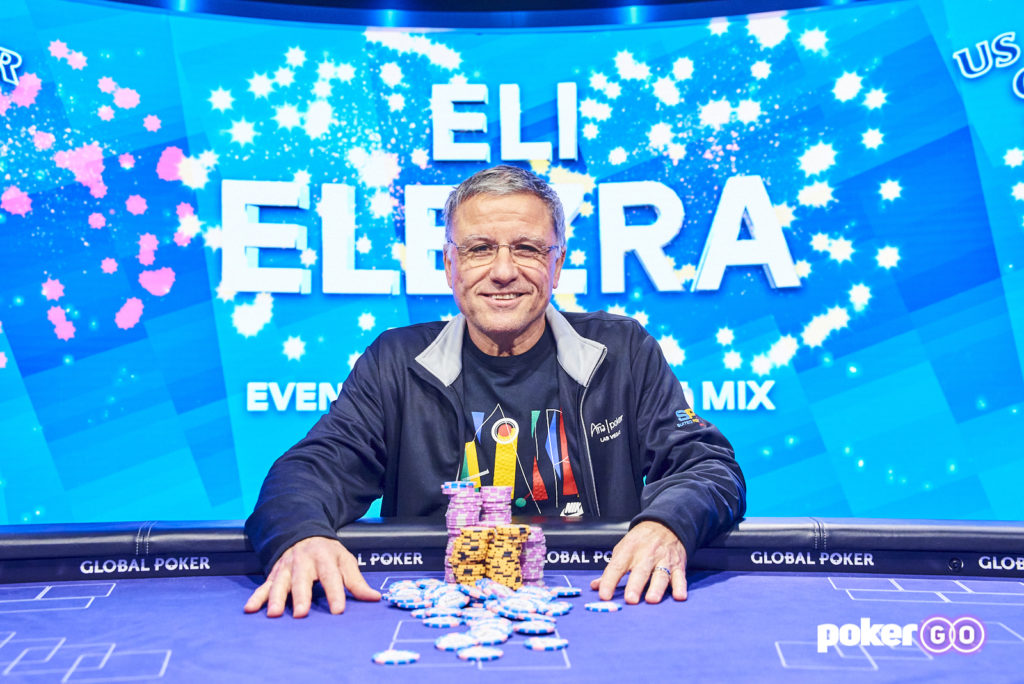 It has been an eventful weekend at the 2022 World Series of Poker. One Poker Hall of Famer has added to his legacy while another came up just short of the top prize. Eli Elezra captured his fifth bracelet in his storied career by keeping David ‘Chino’ Rheem from capturing his first bracelet early Saturday morning, while Phil Hellmuth was denied his seventeenth bracelet late Saturday night by a relatively unknown player

Twenty players came back on Friday to settle the situation in Event #63, the $10,000 Pot Limit Omaha Hi/Lo 8 or Better Championship, and a familiar name was atop the standings. David ‘Chino’ Rheem, who has been enjoying an outstanding 2022 tournament poker season, was in the driver’s seat, but the hounds were certainly in pursuit. Amnon Filippi, Felipe Ramos, and the defending champion of the tournament, Josh Arieh, were primed to run him down as the cards went to the air.

Elezra would make his run from the middle of the pack just before the official final table was set. He eliminated Dylan Lindsey in tenth place and Seunjin Lee in ninth to take over the lead as the final table was set. That would be a short-lived position for Elezra, however, as Filippos Stavrakis stormed past him into the lead after eliminating Charles Coultas.

The battle was far from over, however. Elezra fought back in taking down Arieh in seventh, then it was Rheem’s turn to jump to the top of the standings. The chips flew around the felt and, by the time the dinner bell rang, Rheem had asserted himself atop the standings with 6.3 million chips, while Elezra tried to keep pace with his 4.45 million.

A big three-way hand was the point where the tournament changed course. Elezra and Ken Aldridge got their chips to the center against Rheem and the cards went to their backs:

The 6-10-4 flop only helped Elezra and Rheem towards sealing a low (with Elezra’s Aces leading the high), but a King on the turn allowed Aldridge to take over the high half of the hand. When a nine came on the river, it solidified Aldridge’s high, but Elezra’s Aces would capture a massive side pot with Rheem to push him into the lead with seven million chips as Rheem sank to three million.

Elezra and Rheem then went about decimating the table. Elezra eliminated Stavrakis and Damjan Radanov (in sixth and fourth, respectively), while Rheem knocked out Aldridge and Robert Cowan (in fifth and third, respectively) to send the two major combatants at the final table to heads-up play. As the final table began, it was Elezra who was able to take a million-chip edge into the battle and it would prove to be the winning edge.

Over the span of eighty minutes, Elezra and Rheem sparred, but it was the Israeli poker champion who would prevail. On the final hand, Rheem committed his final chips to the pot pre-flop and Elezra called. Rheem’s K-Q-Q-10 was a great high hand, but Elezra’s A-K-10-5 had a chance of splitting the action. A K-J-5 flop gave the edge to Elezra, with two pair, and a seven on the turn and a five on the river did not change anything to earn Elezra the title.

In the $3000 No Limit Hold’em Freezeout tournament, Phil Hellmuth would fight valiantly to extend his record number of bracelets. But there was one thorn in his side that would be reoccurring through the day. That man was David Jackson, who would eventually put down the former World Champion in capturing his first bracelet and denying Hellmuth #17.

Twenty-six players came back for action on Saturday and Hellmuth was a short stack. He fixed that by doubling up through Jackson at the final table and would ride that stack to the heads-up battle against Jackson. It was not much of a battle – Jackson held a 4-1 lead over Hellmuth at the start of play – but Hellmuth would make it interesting.

Only a couple of hands into the battle, Hellmuth caught a bluff out of Jackson to narrow the gap to less than a million chips, but it would be the last chance Hellmuth would have. Over the next half hour, Jackson would open his lead back up and finish off the winningest player in WSOP history, although it was with a lesser hand.

On that final hand, Hellmuth limped off the button and Jackson pushed the issue with an all-in declaration. Hellmuth decided it was time to make a stand and called with a hand that did have the pre-flop edge:

A 10-4-10 flop kept Hellmuth in the lead, while a nine on the turn gave Jackson some more outs to a King-high straight. That came home with the Queen on the river, giving Jackson the title and denying Hellmuth his opportunity to extend one of the potentially unbeatable records in the world of poker.