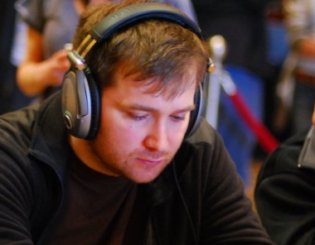 Team PokerStars Pro Eugene Katchalov captured his first World Series of Poker bracelet Saturday by winning the $1,500 Seven-Card Stud title in Las Vegas. The 30-year-old pro from New York collected $122,909 in prize money and removed his name from the list of the best players in the world that have fallen short of poker’s most coveted prize.

The final table of Event #5 began with a handful of tough pros, including Katchalov, Ali Eslami, Alessio Isaia and 2009 November Niner Eric Buchman, who began play with the chip lead. That lead was lost early when Katchalov upended Vasili Lazarou’s attempt at a third Stud bracelet by sending him out in eighth place. Shortly after, Katchalov eliminated Eslami, catching a third 7 on sixth street to improve against Eslami’s lone pair of Queens.

Then it was Buchman’s turn to play table captain. He sent Kai Landry, Dennis Parker and Jonathan Spinks to the rail in succession to build massive chip lead with three players remaining. Buchman, another New York pro who won a bracelet of his own last year, had more than half the chips in play against Katchalov and Isaia. But that wouldn’t last long.

Isaia slowly began to chip away at Buchman’s lead and eventually sent the New York pro out in third place after running into the Italian’s straight on sixth street. That left only Isaia and Katchalov, with the Team PokerStars Pro trailing by a 5.5-1 margin.

Katchalov doubled up through Isaia early in the heads-up match and used that to swing momentum into his favor. Katchalov battled his way into the chip lead before the two players went on their final break of the day and he came back to put a stamp on his historic win. On the final hand, Katchalov made a pair of aces on seventh street to trump Isaia’s Kings and send the Full Tilt Poker Red Pro to the exit just short of his first WSOP. Isaia earned $75,911 for his runner-up finish.

Katchalov is no stranger to success at the WSOP. Last year, he was the only player to make final table appearances in three $10,000-plus buy-in events. That achievement stands as a WSOP record. While his $122,909 in prize money isn’t anywhere close to his largest cash as a pro, the victory certainly is one of the most meaningful to him. He posted his jubilation via Twitter after his win, saying, “Woohoo!!! Thanks for rooting everyone!! Super excited.”

Here’s a look at the final results of Event #5:

Two more events will crown winners on Sunday as the $5,000 No Limit Hold ’em (Event #4) and $1,500 Limit Hold ’em (Event #6) will come to a close. Allen Bari holds a significant lead with four players remaining in Event #4 with more than 67% of the chips in play, but Sean LeFort, Nicholas Blumenthal, Maria Ho still have their eyes on the $874,116 first-place prize. The final table is the first ever for Ho, who also became the first woman to reach a final table at the 2011 WSOP.

Fifteen players remain in Event #6 with William Davis in control of the chip lead. Two-time bracelet winner Scott Clements is still in contention, standing fourth in chips, but the story heading into Sunday is Matt Matros. The 34-year-old pro from New York is attempting to win the same event he won last year, but he’ll begin play as one of the shorter stacks.

The $10,000 Pot Limit Hold ’em Event could also play down to a champion Sunday. With 27 players remaining, it will likely finish up on Monday, but the plan is to play 10 levels or crown a winner (whichever comes first). Stephen “stevie4444” Chidwick is the leader with three tables remaining, but Hold ’em specialists Amir Lehavot and McLean Karr are close behind. Other notables in the field include Jason DeWitt, Robert Mizrachi, Chris Moorman, Sam Stein, Jennifer Tilly, Mike Matusow, Marco Traniello and Nenad Medic. First place will take home $573,456.

Stay tuned to Poker News Daily as we recap all the action from Sunday’s events at the Rio in Las Vegas.