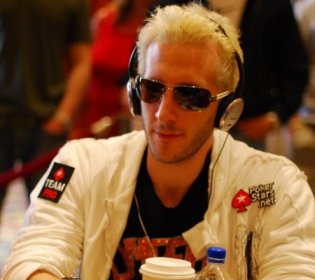 With titles on the World Poker Tour and European Poker Tour to his credit, along with numerous online accomplishments, Bertrand “ElkY” Grospellier is considered one of the most talented No Limit Hold ’em tournament players on the planet. The Team PokerStars Pro has accrued more than $7.5 million in live earnings, plus another $2 million or so online, nearly all of which came in poker’s most popular format. And on top of that, the hyper-tabling Frenchman holds a Guinness World Record for playing the most Single Table Sit & Gos played in one hour (62) in 2009.

So, naturally, you’d think Grospellier’s first World Series of Poker bracelet would come in No Limit Hold ’em. But the 30-year-old proved how truly gifted he is early Wednesday morning when he collected his first piece of WSOP hardware in the $10,000 Seven Card Stud Championship — the first live Stud tournament he had ever played.

Grospellier came back from less than two big blinds during heads-up play to defeat Steven Landfish for the coveted gold bracelet. In fact, Landfish was the only player Grospellier eliminated at the final table. He grinded his short stack to glory to pick up $331,639 in prize money, but more importantly he completed the one goal that had eluded him for five years as a pro.

The likeable Frenchman shared his elation via Twitter after his victory: “Soooo Siick, finally did it after 5 years of @WSOP!!! Thanks so much everyone for the support and best wishes! Gonna get some rest.”

Grospellier outlasted one of the toughest final tables at this year’s WSOP. Among the top finishers were John Hennigan, Alex Kostritsyn, and Stud specialist Chad Brown, who made his first final table since having a 10-pound tumor removed from his stomach in February.

With his win, Grospellier became only the fourth player to claim poker’s “Triple Crown” with wins at the WSOP, EPT and WPT. Gavin Griffin, Roland de Wolfe and Jake Cody are the others to record that achievement; Cody’s came earlier this summer when he won the $25,000 Heads-Up Championship.

Here’s how the $10,000 WSOP Seven-Card Stud final table played out:

One day after Grospellier’s victory, France secured its second WSOP bracelet of 2011 when 27-year-old Elie Payan won the $1,500 buy-in Pot-Limit Omaha event. Payan defeated the largest Pot Limit Omaha field in the history of the WSOP, topping a field of 1,071 players to collect $292,825 in prize money. Feared online pros David “Doc” Sands and Emil “Whitelime” Patel, as well as chess prodigy Jeff Sarwer were in the mix on the final day. But Payan found himself heads-up with American Rafe Kibrit for the title and made a flush on the final hand to secure the victory.

John Monnette was the other winner Thursday morning after he defeated Eric Buchman for the $2,500 Eight-Game Mix crown. The pro from California had come close many times at the WSOP, including a runner-up finish to Phil Ivey in 2009, but he finally collected his first gold bracelet and $278,144 in cash.

Buchman and Monnette played late into the night but the tournament finally come to fruition when Monnette made a pair of jacks in Seven Card Stud to deny Buchman’s quest for a second career WSOP bracelet.

Stay tuned to Poker News Daily for the latest from the 2011 World Series of Poker in Las Vegas.