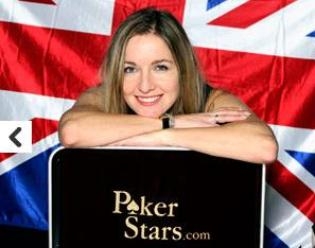 It was bound to happen sooner or later. On the verge of the close of their Season Ten schedule, the European Poker Tour – wrapping up their Sanremo Main Event on Sunday – has finally crowned its first two-time champion in the personage of 2006 EPT London Main Event champion Vicky Coren-Mitchell.

The first level of the day went without incident but, following the immediate start of the second level of the day, the weirdness began. Fundaro, thinking that the tournament would be paused for a break, wandered away from the tournament arena and missed about 30 minutes of the action. He would miss some intriguing action, including the first elimination of the day.

After pushing all in with Aces on the previous hand to boost his stack, Pariset called a Westmorland bet from the cutoff but was faced with a three-bet from Benelli in the big blind. After Westmorland folded, Pariset immediately called and showed only a K-Q to go to war with. Benelli had the goods with his three-bet, pocket Kings, and they stood to a potential flush draw for Pariset as he was eliminated in eighth place.

Coren-Mitchell got a key double up through Andreas Goeller when her pocket Kings held up against Goeller’s pocket sevens to start her slow ascent up the table. Even with the double up, however, Coren-Mitchell was still in the bottom three of the seven players remaining. She would continue to nick away at Goeller and Fundaro to increase her stack, but the other players were moving their stacks upwards at a faster pace.

In two consecutive hands, Martic would be taken down and the lead would change hands. After Benelli opened the action with a 10-9 and three players (including Martic) came along, the flop nailed Benelli squarely in coming K-J-Q. Martic was the only one who came along with his A-K after Benelli sent out what was thought to be a continuation bet and Martic would call another Benelli bet on a four turn. When a Jack appeared on the river, Benelli checked and called a bet of 480K, showed his flopped straight and took the pot and the lead. On the next hand, Benelli would claim the remainder of Martic’s chips when he rivered a flush against Martic.

The players would shuffle chips for a bit before the next elimination took place. Westmorland opened up the action again with pocket Jacks and a short-stacked Stefanelli pushed with an A-J. After Westmorland called, an all heart board of 2-3-4 brought a wheel draw for Stefanelli but a flush draw for Westmorland. Once the board ran out with a four on the turn and a ten on the river, Stefanelli was gone in sixth place.

With five players remaining, Benelli held a nearly four million chip lead over Westmorland and Fundaro with Coren-Mitchell and Goeller pulling up the back of the train. Westmorland closed the gap a bit in eliminating Goeller in fifth place and took the lead back after picking off a Benelli bluff. Westmorland would increase that lead in two more hands with Benelli, eventually ending up with over 8.6 million in chips after the fracas.

Benelli continued his downward spiral and would be the next to depart. After Fundaro opened up the action with a Q-10, Benelli moved all in with his K-10 and seemed poised for the double. A Queen on the flop switched the fates, however, and once no King came to the rescue, Benelli was out of the tournament in fourth place.

It looked as though the fight would be between Westmorland (9.33 million) and Fundaro (5.085 million) as Coren-Mitchell lagged behind (2.27 million). The same steady, patient play that had brought Coren-Mitchell to the final table began to assert itself, however, and by the end of the level she had pulled herself closer to Fundaro but still looking way up at Westmorland’s stack.

After the trio played well over an hour, the chip stacks were tightening up as Coren-Mitchell surged up the board. She would move into second place after flopping trip nines against Fundaro’s A-K and moved into the lead when she doubled through Westmorland when her trip tens with an Ace kicker bested Westmorland’s trips with a Queen. Once she eliminated Westmorland in third place, after her A-3 found a miracle Ace on the river against Westmorland’s Q-6 on a 5-9-9-6-A board, Coren-Mitchell held nearly a 3:1 lead over Fundaro.

Just a few hands into heads up play, the tournament – and history – were finalized. Raising with a Q-J, Coren-Mitchell saw Fundaro just call holding onto pocket Aces. The flop hit Coren-Mitchell squarely, coming down J-7-Q, and Fundaro, in a case of the trapper being trapped, check-raised Coren-Mitchell’s 350K bet to 825K. She simply called and, on a ten turn, saw Fundaro check again. She put a million chips on the line and, after Fundaro sprung what he though was his trap in moving all in, immediately called with her two pair. When the river four hit, Coren-Mitchell’s two pair remained standing, crowning Vicky Coren-Mitchell the champion of the EPT Sanremo.

Coren-Mitchell’s stunning victory – from the short stack to the champion – wasn’t the historic part of the equation. In the ten year history of the EPT, no player had ever won two titles (juxtapose this with the World Poker Tour, which has had 20 multiple champions in its history). Coren-Mitchell’s victory makes her the first ever to achieve that feat, much as it was when she became the first female player to win on the EPT. The victory also moves her into the Top 25 on the list of England’s all-time money winners and into the Top Ten among female players. As the congratulations pour in from fellow pros and fans around the world, Vicky Coren-Mitchell has achieved a historic milestone in the world of poker, one that will be long remembered.