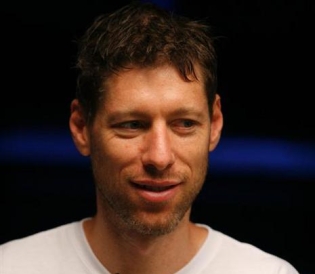 Huck Seed hasn’t cashed in a poker tournament since last September, but the former World Series of Poker Main Event champ is finding other ways to hit six-figure scores at the casino.

Seed won $670,665 playing video poker when he hit a Royal Flush at Aria in Las Vegas this week. The 42-year-old was putting up $500 per hand and had planned on playing until the Progressive Jackpot hit.

Seed broke the news of his big win to his 17,000 Twitter followers, saying, “Internet poker is down in the US, but I’m still pressing buttons!” He also attached a photo of the winning machine.

The photo shows that Seed held the King and Jack of spades and hit the Ace, Queen and Ten of spades to complete the Royal Flush.

According to Seed’s friend who posted details on TwoPlusTwo, Seed noticed the massive size of the progressive jackpot and then read some books on video poker to figure out his edge and the correct way to play. He calculated that there was a 0.65% edge for the player due to the size of the jackpot and he felt that he could make about $3 per hand, not including comps. Seed played for nearly six hours, playing around 1,000 hands per hour, before the hitting the royal flush. He said on Twitter that he was in for $50,000 when it hit.

Seed had teamed up with investors to take a shot at the video jackpot before, but had very little success. He decided to go solo this time around and cashed in on the colossal prize.

Poker pro Allen Kessler, known for his success as a video poker grinder, confirmed that Seed’s edge in the game was about $3 per play, but he added that Seed was probably only playing 500-600 hands per hour.

Seed had a miserable run at the World Series of Poker in 2011, failing to cash in any of his 23 events and dropping close to $200,000 in tournament buy-ins. However, he’s still recognized as one of the best all-around players on the planet.

He won the WSOP Main Event in 1996, claiming $1,000,000 and his second WSOP bracelet. His first bracelet came in 1994 in a Pot Limit Omaha event, and he’s since added a pair of victories in Razz Events, bringing his bracelet count to four.

Seed’s most recent success came at the 2010 WSOP Tournament of Champions, where he collected $500,000 by placing first in a field of poker legends. He also won the NBC National Heads Up Poker Championship in 2009 for $500,000.

His video poker jackpot trumps both of those scores. Only his Main Event title paid more than what he made at Aria this week.