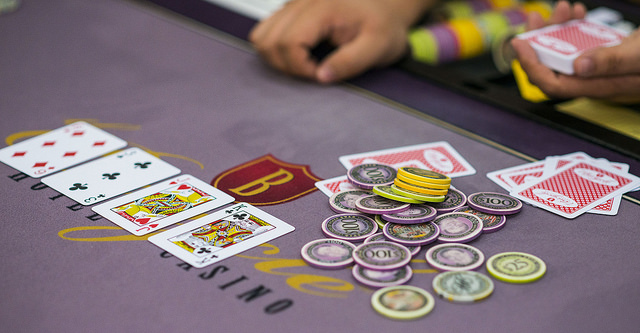 Note: This article was originally published 8/29/22, but technical issues required it to be re-posted.

The $5,250 buy-in World Poker Tour (WPT) Legends of Poker Main Event is currently in the last of three starting flights at The Bike, as the prize pool continues to build toward the $2.5 million guarantee. After Days 1A and 1B, Michael Dyer is way out ahead of the pack with 739,000 chips.

We often see players with monster stacks going into final tables, but it is unusual to see someone with such a large lead relative to their opponents after just one day. For comparison, there are just two other players after Day 1B with even 400,000 chips, let alone 700,000: Dillon Najor with 484,500 and Joseph Poozhikala with 414,000.

Dyer is no stranger to stacking chips. He finished third in the 2018 World Series of Poker Main Event, cashing for $3.75 million. He also has another million dollars in live tournament earnings outside of that career-changing score.

One of the biggest hands of Day 1B came during Level 9 the second-to-last level of the day. One player moved all-in pre-flop for 25,500 chips, the player in the cutoff called, and then Tal Avitan moved all-in over the top of both of them. The cutoff player boldly made the call for 100,000 chips.

The cutoff had 7-7 – an interesting hand with which to take that stand – and was up against the first player’s Q-T suited and Avitan’s K-K. The Q-T had a little bit of a chance when the flop came down J-T-3 (flush not in play for that player), but the 6 on the turn and J on the river was of no help to either underdog and Avitan had a double knockout to grow his stack at the time to 295,000.

As mentioned, there is one more starting flight left; Day 1C started just a short time ago. Players are permitted to re-enter each flight once should they bust. This is also a “best-stack forward” event, meaning that if a player makes it through Day 1 on more than flight, they take their largest stack to Day 2. Registration is open until the start of Level 9, which will be fairly late Monday night.

The tournament drew a total of 137 entries on Day 1A, with 46 players making it through to Day 2. There were another 202 entries on Sunday’s Day 1B and 65 players made it to Tuesday. Thus, that’s a field of 339 entries and 111 survivors after the first two flights.

Expect Day 1C to be the largest of the three, as is usually the case. The tournament needs 177 entries to beat the $2.5 million guarantee, so the World Poker Tour should breathe easy.