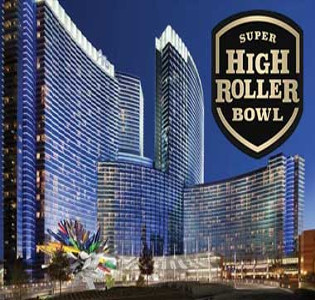 After three days of competition in the 2017 Super High Roller Bowl presented by Poker Central, Jake Schindler is atop the standings. Holding well over two-thirds the chips in play with two other competitors, Schindler is the odds-on favorite to take the $6 million prize tonight.

Only seven men would take down any money from the $16.8 million prize pool that had been created by the 56-player field ($300,000 buy in, no juice). There was a small problem on Wednesday, however, as eight men returned with Schindler holding the lead over Christoph Vogelsang and Byron Kaverman. That meant there was some drama for those to watch over PokerGO as one of them (Jason Koon (685K) and Justin Bonomo (1.735 million) were the short stacks) would be leaving ARIA with nothing to show for their efforts.

The eight-man final table completed the rest of the previous night’s level with little fanfare, but that would change once the blinds and ante (10K/25K blinds, big blind paying lone 25K ante) were increased. Schindler would give up some chips after flopping two pair with his 10-8 on an 8-5-5-10-Q board, only to see Vogelsang river his own two pair in revealing an A-Q. Vogelsang continued to march upwards, cutting a swath of chips from Stefan Schillhabel, to close the gap with Schindler to about 400K. Still, no one wanted to be the one – the person who would pop the money bubble and walk away empty-handed – as another level clicked off.

Over the next level, it was the Pratyush Buddiga Show. At the start of Level 20, Buddiga cracked the three million chip level in taking a hand from Schindler and he only increased it over the remainder of the level. Against Leon Tsoukernik, Buddiga cracked the four million mark in chips after Tsoukernik, the Day One chip leader, couldn’t call a half-pot bet (about 450K) from Buddiga. Even with the strong run by Buddiga, though, Schindler stayed at the head of the pack, albeit with a slim 150K chip lead over Buddiga, as another 90-minute level was completed.

During Level 21, Buddiga would take the lead away from Schindler. After raising from under the gun, Buddiga saw Schindler defend his big blind as the twosome saw a Q-6-6 flop. Both players checked their option and did it again after another Queen came on the turn. When a four came on the river, Schindler suddenly popped up with a bet that Buddiga called. Schindler had pocket sevens, but Buddiga had caught with his Q-9 for a turned boat, scooping the chips and the chip lead from Schindler in the process.

One thing that didn’t occur over the first four levels of play? The knockout to bring the players to the money. After six hours, eight men were still in contention on the final table. Koon and Bonomo were both at risk, sitting under 600K in chips (590K for Koon, 560K for Bonomo), while Buddiga enjoyed his view from the top and Schindler looked up at someone for the first time. Bonomo was able to keep his head above water with a couple of well-timed jams, but Koon would not be so fortunate.

After a Schindler open, Koon called out of the big blind to see an 8-K-10 rainbow flop. Koon checked his option and, after Schindler made a continuation bet, raised all in. Schindler didn’t hesitate, making the call, and once the cards were on their backs it was obvious why. Koon was open-ended to the straight with his 9♥ 7♥, but Schindler had improved on his pocket eights (flopped set) to hold the lead post-flop. A five on the turn and a deuce on the river didn’t bring Koon his straight, sending him to the rail for no payday as Schindler retook the lead.

Schindler and Buddiga were ruling the roost, so when the two clashed in a massive hand it was extremely surprising. After Vogelsang opened the betting and Schindler called, Buddiga three-bet from the big blind. Vogelsang, up against the two big stacks on the table, decided to get out of the way, but Schindler called to see a flop. The 8-7-Q flop saw Buddiga check-call Schindler’s 400K bet and, after a trey on the turn, check-call another 750K on the turn. A second trey would hit the river, drawing another check from Buddiga. After some deep thought, Schindler put himself at risk by moving all in and, after using one of his extensions, Buddiga didn’t buy his story and made the call. Turning up his pocket eights, Schindler had run down Buddiga’s pocket Aces as he swept up the massive four million chip pot to take a massive lead over the field and send Buddiga to the basement of the final table.

Holding almost half the chips in play, Schindler decided to sit back and see who would emerge from the field. Vogelsang was his immediate threat, even with only 2.565 million chips, while the remainder of the field were all under two million chips each. It was time for someone to come after Schindler and, when Level 23 reached its later stages, that action took off.

Vogelsang would eliminate Bonomo, who never quite got moving at the final table, when he nailed a runner-runner straight to best Bonomo’s flopped trip deuces. Two hands later Buddiga joined him after running his A-9 into Tsoukernik’s A-Q, to finish in sixth place. With five players remaining, Schindler’s 8.165 million stack dwarfed Vogelsang (3.84 million), Tsoukernik (2.995 million), Kaverman (895K) and Schillhabel (885K) as the players headed to a break.

That would be the last break of the night as, once the players got back, they completed the final two eliminations of the night to end the proceedings. Schindler would open the betting and Kaverman, in the small blind, responded with an all-in. Surprisingly, Vogelsang made the call and, with little deliberation, Schindler put him to the test with an all-in of his own. Vogelsang would reluctantly lay his hand down and Schindler, of course with pocket Aces, faced Kaverman’s pocket eights heads up. After a slight scare with a gut shot on the turn (J-4-7-6), Schindler would take the hand once a King hit the river to eliminate Kaverman in fifth place.

The very next hand, Vogelsang got back in the mix with an opening bet and Tsoukernik moved all in. After Schindler got out of the way in the big blind, Vogelsang immediately called, tabling his pocket Aces against Tsoukernik’s A♦ 10♦. Two diamonds would come for Tsoukernik by the turn, but a third wasn’t in the cards as Tsoukernik was eliminated in fourth place to close the Super High Roller Bowl for the night.

And the finishers to this point:

(Jason Koon made final table, did not cash)

It certainly appears that it is Schindler’s tournament to lose, holding nearly two-thirds of the chips in play. When the PokerGO cameras pick the tournament back up at 1PM on Thursday, the champion will be determined and the remaining $12 million (with $6 million to the winner) of the prize pool handed out.