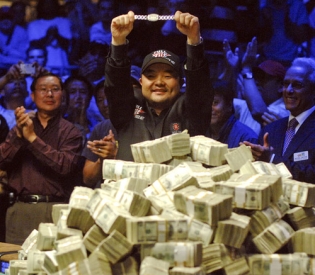 Just last week, we reported that 2007 World Series of Poker Main Event champion Jerry Yang had a number of personal items seized by the United States Internal Revenue Service and will have them auctioned off on April 4th in order to help pay delinquent taxes. Among those items is his gold and diamond Main Event bracelet, produced by Corum. Last Friday, Yang spoke with Mark Hoke of Fifth Street Radio to explain what was going on.

A total of 16 items are up for auction, all of them being watches and pieces of jewelry. One of the items is actually another WSOP bracelet, either from 2003 or 2007 (the last digit is a bit difficult to make out in the picture), and could not have been Yang’s, as the 2007 Main Event is the only WSOP tournament he has won. Thus, he either purchased it from someone or received it as a gift.

According to the Notice of Encumbrances posted on the U.S. Department of the Treasury’s website, Yang has a federal tax lien of $571,894.54 as well as a few thousand dollars in back taxes owed to the state of California. That is obviously an incredible amount of money and most speculate that it has to do with his $8.25 million WSOP victory.

That speculation turned out to be spot on. In the interview, Yang told Hoke the story:

I did pay my state taxes, over $900,000. Unfortunately, I’m not going to blame anybody but myself, but I encountered people that I thought I could trust and would give me good advice, but unfortunately some of the people that I hired or got on my team were advising me in the wrong way, if you will. So I did make some mistakes, and what made the matter worse was that in April of 2008, when it was time to pay the federal tax, there was a financial crisis with the Bank of America, and that’s where I put my money in. Unfortunately, all my funds were locked away, were frozen if you will, and so I wasn’t able to pay my federal taxes on time. Due to penalties the amount that I owed at that point, after I paid everything, I owed roughly between $150,000-$170,000 due to penalties and things like that. That’s why I owe the IRS a little bit more than that today. That is basically the story. Again, I don’t have anybody to blame but myself.

He added that he did donate 10 percent of his winnings to charity, just as he had promised, splitting it amongst the Make-a-Wish Foundation, Feed the Children, and the Ronald McDonald House. He admitted, however, that he really should have paid his taxes first. He also gave some money to friends and family and spent over half a million dollars to open a restaurant, Pocket 8’s Sushi and Grill in Merced, California.

He told Mark Hoke that fortunately, the restaurant is doing well, so other than this IRS snafu, he should be fine financially. Yang said he is working on an agreement, possibly an installment plan, with the IRS and the government seems to be receptive.

When asked about the possibility of getting the bracelet back, Yang said:

The possibility is always there, but if I lose them I lose them. I hope not, hopefully my CPA can maybe talk them into holding on to it until we can come up with some sort of agreement. That is my hope and my prayer, especially the bracelet. It has a sentimental value, and it means a lot to me, but again, I’m in this mess so I’m just going to do my best. That’s all I can do.

Putting things in perspective, Yang added, “If I survive a refugee camp and a communist invasion of my country, I know I will survive this.”

To listen to the entire interview with Jerry Yang, visit Fifth Street Radio and skip ahead to about the 47 minute mark.