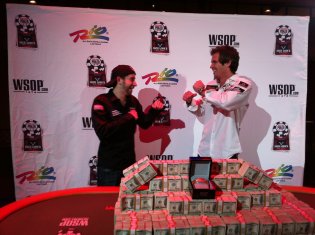 On Sunday, World Series of Poker (WSOP) Main Event finalists Jonathan Duhamel and John Racener met the media and a host of family and friends at the Masquerade Stage at the Rio in Las Vegas. The festivities followed a meatball eating contest sponsored by Martorano’s, an on-site restaurant featuring world-class Italian food. Joey Chestnut was spotted on stage.

The festivities got underway at 1:30pm local time and WSOP Media Director Nolan Dalla gave a rousing introduction of both players. Media including Bluff Magazine and the Las Vegas FOX affiliate were on-hand for the raucous introduction that followed the Rio’s sky show. Then, everyone was allowed on stage to interview Duhamel and Racener. The latter planned to take a relaxing day away from poker, according to his family, and hang out with his significant other. Racener was later spotted in the Rio sports book eating and watching the three late games in the NFL.

Racener told reporters why he survived until heads-up play in the world’s most prestigious poker tournament: “My play and patience showed that I wanted it the most. Everyone else was too busy gambling in situations that were just very unnecessary in my opinion. I just waited it out and it worked out perfect for me.”

Duhamel even spouted off French quotes for his hometown contingent and was later seen outside of the entrance to the Penn and Teller Theater. There, he’ll face off against Racener beginning at 8:00pm PT on Monday night. The tournament’s conclusion, which may last one hand or several hours, will be seen on ESPN on Tuesday night at 10:00pm ET.

Duhamel told the media on Sunday, “I’m having fun with it and I’m trying to continue to have fun with everybody… I have a lot of support. All those guys were behind me and cheered for me. I want to make them proud. We had 150 to 200 people out and they are coming back tomorrow.” Look for the red hockey jerseys to find Duhamel’s fans.

A discussion among the media centered on what range Duhamel would call with if Racener pushed all-in pre-flop on the first hand. Duhamel will have the button when play resumes and there will be 13 minutes left in the current level. The blinds stand at 600,000-1,200,000, meaning that Racener’s stack of 30.75 million is equivalent to 25 big blinds. The price of poker will then go up to 800,000-1,600,000.

Poker News Daily will be on-hand starting at 6:00pm PT on Monday. After meeting with the head of PokerScout.com, we’ll head inside the Penn and Teller Theater to watch the ceremonies for the Poker Hall of Fame Class of 2010, which will see Erik Seidel and Dan Harrington inducted.

See you on Monday night! We’ll be playing poker here in Sin City if you need us.