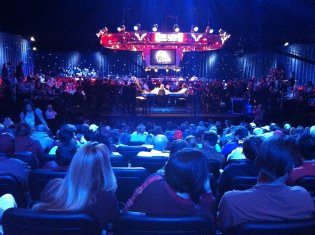 It’s early going in the 2010 World Series of Poker (WSOP) Main Event heads-up confrontation. We’re nearly where we started in chips, although John Racener has bled about 25% of his stack. With the first break of the night taking place around 9:30pm local time, Lady Gaga’s hit “Poker Face” is blasting throughout the Penn and Teller Theater lobby.

The defining hand of the first hour of play occurred when Racener was all-in with pocket queens and up against the K-4 of Jonathan Duhamel. The latter’s contingent called hard for a king throughout the hand, but the board ran out 8-6-J-2-7. Racener doubled up back to the starting stack and, just like that, we were back to square one. My my my poker face, my my poker face. Sorry, that song is officially stuck in my head. Racener Tweeted following the hand, “QQ vs K4 all in pre flop gets me up to 40 million.”

Racener’s girlfriend was shown on the two big screens here at the Penn and Teller Theater and received much hooting and hollering. Then, reigning champion Joe Cada was shown and got the same reaction. Classic.

The first break saw many of the fans head to the restroom. However, as they returned to their seats in the Orchestra section, several were unable to reenter because they lacked a wristband. A miniature mob has formed in the doorway, with one fan asking Rio staff, “So I can’t even go to the bathroom?” The line for the men’s room stretches about 50 people deep and well into the Penn and Teller Theater lobby. The Orchestra level looks relatively full following the break despite the possible misunderstanding.

We’re through 35 hands at the first break. Duhamel has 196 million in chips, about eight times Racener’s stack of 23 million. ESPN’s Bernard Lee reflected on the first 35 hands: “The heads-up is pretty much what you expected from Duhamel’s side. You would have expected him to be aggressive and raise every pot. Racener has to make a decision and Duhamel will put him to that decision every time. Racener has been a little more passive than I would have thought. There have also been fewer all-ins than I would have thought, which shows these guys have been willing to take flops.”

We’ve seen 21 flops so far out of 35 hands, a 60% clip. Several members of the media, who are not currently writing bust out stories, are busy comparing fantasy football results from the weekend. This author went 2-1 over the weekend in three leagues.

In case you’re wondering, there are a bevy of poker pros in attendance tonight including Greg Raymer, Joe Cada, Chris Ferguson, Gavin Smith, Paul Magriel, Jeff Madsen, and Michael “The Grinder” Mizrachi, who was ousted in fifth from this event for $2.3 million. Mizrachi has been busy signing autographs for fans during the first break. His faithful are hoisting up everything from t-shirts to programs for Mizrachi to put his magic marker to.

Following the break, the all-ins came in earnest, although none have been called yet. Stay tuned to Poker News Daily for the latest from the 2010 WSOP Main Event.