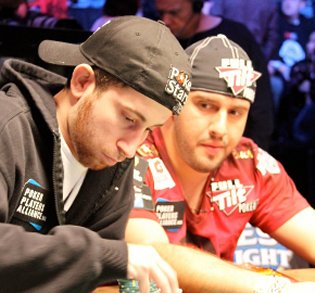 Just minutes after Jonathan Duhamel took down the 2010 World Series of Poker (WSOP) Main Event on Monday night, the Canadian shared his jubilation with the media, who crowded around him in the lobby of the Penn and Teller Theater at the Rio. Poker News Daily was on-hand for the three-ring circus; you can view our WSOP press conference video.

Duhamel began the interview process by speaking in French to a Rogers Sportsnet reporter. Then, he reverted to English and told the press, “It means so much to me. It’s a dream come true for me. All my life, I’ve dreamed of it and to have the chance to be called the champion is amazing… I’m the happiest guy on Earth right now.” Duhamel banked nearly $9 million after besting John Racener heads-up.

The final table of the Main Event began on Saturday, when the November Nine converged at the Rio following a four-month break. Duhamel admitted, “It was a very tough table, so I knew if I made any mistakes, I was going to pay the price. I had good spots and won my flips, which you have to do to win tournaments. I played the best I could. I have to give credit to all of the other guys and especially to John Racener.” Each November Nine member earned at least $811,000, but there was an $8 million difference between ninth place and first.

Duhamel will now follow in the footsteps of players like Joe Cada, who last year appeared on mainstream shows like “The Late Show with David Letterman” and ESPN’s “SportsCenter” following his Main Event victory. Duhamel explained, “I’m going to do my best to try to be the best poker ambassador. It’s a dream come true for me, so I’ll do my best. I’m up for the challenge. I’ll do all of the biggest tournaments and will be back next year for the World Series. I’m going to play a lot of poker.” Duhamel became the first Canadian WSOP Main Event champ in history.

One reporter asked Duhamel about his poker-playing friends back in Quebec. Duhamel responded, “There are a lot of young poker players and especially a lot of young guns who play a lot online. They were all there to give me some tips when I needed them, cheered for me, and helped me a little bit. I have to give them a lot of credit for the victory I have.” Duhamel’s supporters wore bright red Montreal Canadiens hockey jerseys throughout the final table weekend.

What is a young gun to do with $8.9 million? Duhamel told the media that he had not yet decided because he has been busy preparing for November Nine play. He added, “Now that it’s over, I have no idea. Maybe I’ll travel a lot and go to a lot of countries whenever there are big tournaments.” Many PokerStars pros will now travel down Interstate 15 to Los Angeles, the site of the next North American Poker Tour (NAPT) stop. NAPT L.A.’s Main Event starts on Friday from the Bicycle Casino.

In the hours leading up to heads-up play, the media debated how many hands we would see. Would Duhamel call an all-in from Racener on the first hand or would Racener grind out his short stack for a double up? Duhamel revealed his strategy entering Monday’s finale: “I wanted to mix it up a little bit and not to be too obvious with my game, so I limped a little bit to try to confuse him. I was raising a lot also, but just tried to balance and do the best I could.” In the end, 40 hands were needed to determine a winner.

Duhamel plans to donate $100,000 to a charity benefiting children in his hometown of Montreal and will likely be spending more time at Canadiens games. The hand that propelled him to the top of the pack late was a double up with pocket queens at the expense of Joseph Cheong, who 6bet all-in pre-flop with A-7. “I wasn’t folding those queens, but I was unhappy he decided to play it,” Duhamel reminisced. “Because John Racener was a little short, my goal was to wait until he busted or doubled up, but Joseph Cheong wanted to play a lot of poker.” Cheong went out in third place.