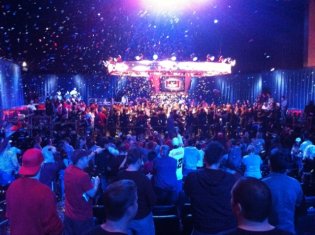 It’s all over. Jonathan Duhamel is the 2010 World Series of Poker (WSOP) Main Event champion. Duhamel became the first Canadian Main Event winner and has a throng of fans decked out in red hockey jerseys here at the Penn and Teller Theater at the Rio going bonkers. Duhamel banked $8.9 million, which he’ll need to convert to his home currency. ESPN is currently in the stands taking b-roll of Duhamel supporters. Racener earned $5.5 million, a healthy consolation prize.

In the 2010 WSOP Main Event’s final hand, John Racener was all-in with K-8 of diamonds and up against the A-J of Duhamel. Racener being all-in brought the crowd to its feet and both players leaned on the table to see a flop of 4-4-9. Tournament Director Jack Effel reminded the audience of Racener’s outs to a double up. An ace on the turn would end the Main Event and any other card would leave Racener drawing to six outs on the river.

The turn was a six and the river was a five, bringing the 2010 WSOP Main Event to a close just 90 minutes after it began. Racener sought comfort from his family and Duhamel was lifted off his feet and began crowd surfing on stage. The scene was reminiscent of an Ozzy Osbourne concert. Duhamel looked to the sky, let out an exuberant scream, and posed for pictures with his $8.9 million bounty. Then, a Canadian flag was brought onto the Penn and Teller Theater stage, which Duhamal proudly waved.

The crowd chanted “Show some skin” to Duhamel in the moments after his win and began singing the words to “Na Na Hey Hey Kiss Him Goodbye.” A short break occurred right after Duhamel’s win and Racener was brought to the ESPN filming area to the right of the presidium. In the background, Duhamel continued celebrating with his fans. Racener was outfitted with a microphone.

This was the youngest Main Event final pairing in WSOP history. Accordingly, it became quite active following the first and only break of the night, with Racener’s stack slowly slipping to 10 big blinds and Duhamel putting the pressure on.

Duhamel received his gold bracelet from Effel and confetti shot out of cannons from the Orchestra level, raining down on the audience below. Duhamel raised the bracelet high above his head and a throng of media took pictures on stage. Duhamel told his fans, “Thank you to everybody for being here… Thank you to everybody. It’s so crazy right now and I don’t know what to think. Enjoy the party and it’s going to be great tonight.”

Congratulations to Duhamel and the nation of Canada on a historic night. We’ll have more reaction for you right here on Poker News Daily.