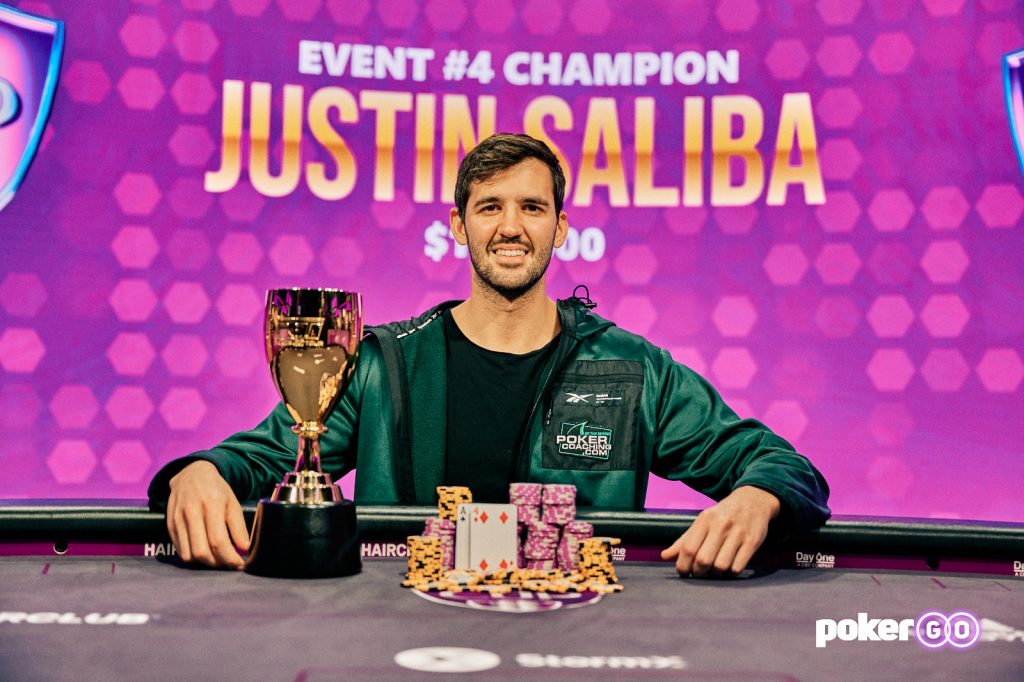 2023 has been good to Justin Saliba so far. In the first week of the year, he finished fifth in the $5,300 buy-in “The Return” event at the Borgata, cashing for over $300,000. And just yesterday, he won PokerGo Cup Event #4: $10,000 No-Limit Hold’em after beginning the final table with the second-smallest chip stack.

The final table didn’t start with a tremendous amount of promise for Saliba, either, as Calvin Lee doubled up quickly, sending Saliba down to the bottom spot at the table. Everyone needs to get a little lucky to win a tournament though, and Saliba did just that, finding a double-up himself when his Q-J cracked poker legend Erik Seidel’s pocket Queens. Seidel had less than one big blind after that and went out in sixth place.

Andrew Moreno was the next player to fall, unable to shake Adrian Mateos. In one hand, Moreno moved all-in from the small blind with A-7, only to be called by Mateos and his A-Q out of the big blind. Mateos doubled-up and then used pocket Aces to eliminate a short-stacked Moreno shortly thereafter.

Calvin Lee was knocked out in fourth place when he called all-in with K-9 after Anthony Hu shoved with J-8. A Jack flopped and that was it for Lee.

It was a similar situation for Mateos’ ouster. Saliba shoved from the small blind with K-J and Mateos called all-in from the big blind with K-T. Saliba didn’t have to come from behind in the hand though, as his kicker held up and Mateos was eliminated in third place.

Going into heads-up play, Hu had more than twice as many chips as did Saliba, 6.675 million to 3.075 million. Blinds were 50,000/100,000 so Saliba had some room to maneuver. He was persistent, whittling down Hu’s stack to 2.5 million before Hu took a stand with A-7. Saliba only had A-4, so it looked like Hu was going to double up back into the chip lead, but Saliba rivered the wheel straight to win the hand, the tournament, and $195,000.

Though Adrian Mateos did not win, his third final table in four events elevated him from ninth to first on the 2023 PokerGO Cup leaderboard with 238 points, ahead of Ed Sebesta and Sean Winter, who are tied at 216. Aram Zobian is in fourth with 208, the only other player with more than 200 points so far.

Saliba moved into fifth place with 195 points and Hu climbed to the sixth spot with 185.