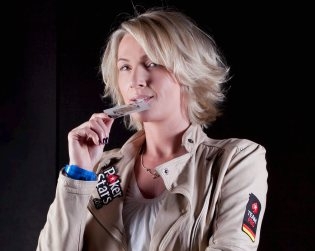 PokerStars sponsored pro Katja Thater has taken down the Season 6 European Poker Tour (EPT) Mixed Games Player of the Year title. A press release distributed by PokerStars explains the origin of the award: “The EPT Mixed Games Award acknowledges the achievement of players who thrive in the world of the more obscure poker variations such as Deuce to Seven [and] Badugi.”

The eight games featured in Sunday’s tournament were Limit Triple Draw 2-7, Limit Hold’em, Limit Omaha High-Low, Limit Razz, Limit Stud, Limit Stud High-Low, No Limit Hold’em, and Pot Limit Omaha. At the end of the day, Thater defeated EPT Berlin Main Event runner up Tahkokallio, while Hachem finished in third place. For capturing the EPT Mixed Games Player of the Year honors, Thater will receive entry into the kickoff EPT event of Season 7, which will take place in Tallinn, Estonia. She’ll also be presented with a trophy on the opening day of the Main Event.

This isn’t Thater’s first trip to the winner’s circle in an Eight Game event. During the 2010 PokerStars Caribbean Adventure, the top female pro took down a $1,000 Eight Game tournament for $10,000. Her lone WSOP bracelet came in a Razz event in 2007 and saw her best a field of 341 players. Thater made her mark on the poker world by taking fifth in the EPT Warsaw Main Event that year for $85,000.

PokerStars has been offering Eight Game virtual tables for a year and a half now, with the richest weighing in at $400/$800. Starting on June 28th, the world’s largest online poker site will be holding satellites for the EPT Tallinn Main Event, which runs from August 11th to 16th and carries a €4,250 buy-in.

Thater’s win is the latest in a string of victories that have some in the industry dubbing 2010 the “Year of the Woman.” In March, UB.com pro and Poker News Daily Guest Columnist Annie Duke took down the National Heads-Up Poker Championship for $500,000. One month later, fellow UB.com pro Liv Boeree came out on top in the EPT San Remo Main Event for $1.7 million. The tournament featured a record-setting field of 1,240 players and, according to the Hendon Mob database, marked Boeree’s first six-figure and seven-figure live score.

WSOP Vice President Ty Stewart commented on the UB.com poker news show “Poker2Nite” that at least three women would win bracelets during the 2010 tournament series. In response, Full Tilt Poker pro Mike Matusow vowed to run naked down the Las Vegas Strip if Stewart’s predictions turned out to be true. A woman is all but guaranteed to win the $1,000 Ladies’ Event.

Making her debut at this year’s Las Vegas WSOP is Annette “Annette_15” Obrestad, who won the WSOP Europe Main Event three years ago. Obrestad, now 21 years-old, finished ninth in the National Heads-Up Poker Championship and made three final tables during the recently completed Five Star World Poker Classic at the Bellagio as she warmed up for the WSOP.