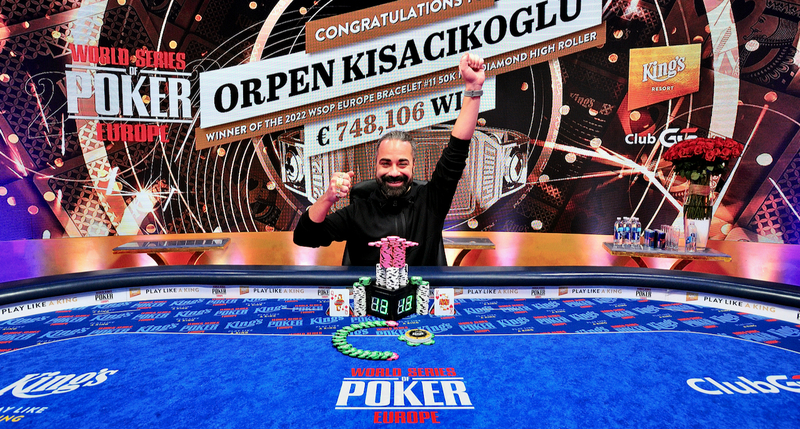 It is slowly coming to a close. Two weeks of poker bacchanalia at the King’s Casino in Rozvadov, Czech Republic – otherwise known as the 2022 World Series of Poker Europe – is heading into its final events. In the Diamond High Roller, the players fought down to a player who is a known commodity on the European circuit taking home the bracelet and a large payday.

The €50,000 Diamond High Roller at the 2022 WSOPE, Event #11 on the schedule, featured some of the biggest names in poker battling over piles of cash. After Day One on Thursday, 22 players were still in contention with Canada’s Timothy Adams leading the way. Unfortunately for those 22 players, late registration wasn’t over until after Level 15 of the day, leaving them in the dark as to what they were playing for (other than the WSOPE bracelet).

The early play was frenetic, however, as the players jostled for position. Martin Kabrhel and Johan Guilbert were two players who took advantage of the late registration, Kabrhel with a second bullet. Once the dust settled from late registration, 45 entries had been received to build a €2,116,125 prize pool. Only seven players would be receiving any of that largess, making the battles on the baize even more intense.

Once the late registration closed, the flow of players from the King’s Casino battlegrounds began in earnest. Ben Heath left at the hands of Shaun Deeb, who is having an outstanding 2022 WSOPE, while Guilbert went about spinning up his starting stack to become a force on the tables. Once Kisacikoglu knocked off Ole Schemion in seventeenth place (€0), two tables were redrawn with Adams still holding the lead.

From there, it was a battle to the final table. Adams got richer in knocking off Kabrhel to approach the ten million chip mark, while Danny Tang tripled up to knock off Guilbert. A little “Canadian on Canadian” violence would take place also, and it would result in one of the men from the “Great White North” heading to the rail.

After Daniel Dvoress opened the betting, Daniel Negreanu made the call and the duo saw a 9♠ Q♠ Q♣ flop. Dvoress would put out a continuation bet and Negreanu popped him with a raise. Debating his position and the potential of eliminating a dangerous opponent, Dvoress eventually settled on a three-bet that brought the rest of Negreanu’s chips to the center of the felt. Dvoress, after a count, made the call and the cards went to their backs:

Negreanu had flopped great, catching trip Queens, but Dvoress had a nut flush draw that could spoil Negreanu’s run in the event. An Ace on the turn was particularly unhelpful for Dvoress, but the 6♠ on the river completed his spade flush and flushed Negreanu’s trips down the toilet. That would end Negreanu’s day on the tables and rocket Dvoress up over five million in chips.

Day Two action in the Diamond High Roller was particularly cruel for Germany’s Teun Mulder. Starting the day second in chips behind only Adams, Mulder was able to get up near the 4.5 million chip mark before the wheels came off his tournament. First, he would double a short-stacked Deeb, but it was another two-hand segment that resulted in his departure from the tournament.

After some back-and-forth betting, Mulder and Kisacikoglu would get their chips to the center, with Mulder’s K-J falling to Kisacikoglu’s pocket Queens to double Kisacikoglu up. The very next hand, Mulder would move all in with Big Chick, but Adams would snap him off with pocket tens on an eight-high board. That would spell the end for Mulder, well short of the final table and the money.

Still Work to Do at Final Table

Deeb dismissed Laszlo Bujtas in tenth place after winning a race (Deeb’s Big Slick catching versus Bujtas’ pocket Jacks) to bring the tournament to the final table. Two more eliminations were left to get to the money, however, and nobody was willing to take that long walk. Deeb turned out to be the Grim Reaper, in this case, knocking off both Jorryt van Hoof and Paul Phua to bring the players to the money and put Deeb in charge at the final table.

Once the money bubble was popped, Kisacikoglu went on the offensive. He eliminated Dvoress in seventh place and cut some chips from the stack of Sam Grafton to take over the lead. Deeb didn’t take kindly to that, firing back against Nick Petrangelo to snatch the lead back. Adams wasn’t ready to go into the Czech night, either, as he eliminated Daniel Pidun in sixth place to sit atop the standings once again.

Arguably the hand of the tournament occurred between Adams and Kisacikoglu. In the cutoff, Kisacikoglu raised the betting to 675K, but Adams wanted to play for it all. He pushed all in off the button for eleven million and Kisacikoglu reluctantly made the call. It put Kisacikoglu at risk, but it was also the right decision:

The board ran out with only one diamond and only eight high, earning the double up for the Turkish pro and sending Adams down to only two million chips; Kisacikoglu would complete Adams’ elimination in fifth place moments later to amass a stunning 26 million chip stack.

This lit the fire under Deeb, who took out Petrangelo to stay viable in the tournament, but Kisacikoglu would eventually get Deeb. It was Grafton who started it all with a raise, but Deeb three-bet the action with pocket Jacks. Kisacikoglu had a cooler, however, with pocket Kings, and he four-bet to five million chips. That was enough for Grafton to get out of the way (with his A-8), but Deeb responded with an all-in. Kisacikoglu immediately made the call and, after the board ran out Ace high (meaning Grafton would have won), Kisacikoglu was up to 35.4 million in chips and Deeb was out in third place.

Grafton had his work cut out for him and he knew it. Still, he valiantly tried to fend off Kisacikoglu with his 9.75 million chips, but it wasn’t enough for Grafton. It would only take fifteen minutes for Kisacikoglu to finish the job, although he had to river a straight to defeat Grafton’s double-up effort to close the deal.