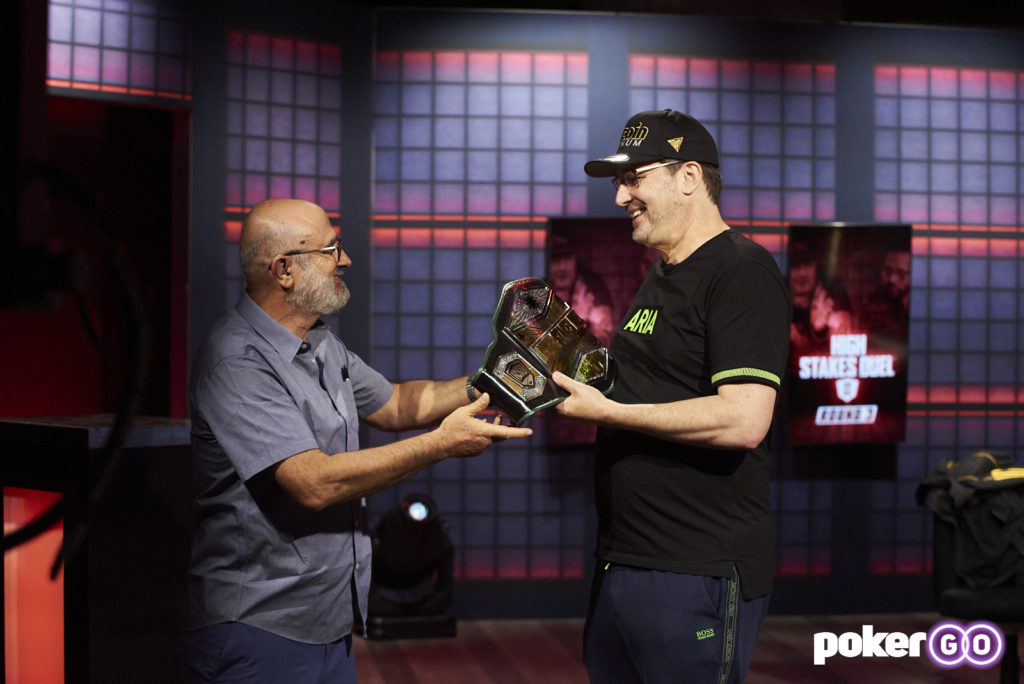 Maybe he was just born this good?

15-time World Series of Poker bracelet winner Phil Hellmuth does not have much left to prove when it comes to the game, but he put a cherry on top in the PokerGO Studios in Las Vegas on Wednesday night. In Round 3 of his High Stakes Duel II with fellow Poker Hall of Famer Daniel Negreanu, Hellmuth once again emerged victorious, earning his third victory against Negreanu and his sixth victory in the format overall. For his efforts, Hellmuth picked up $350,000 from Negreanu and $700,000 overall in the two matches.

Hellmuth Holds Court in Round 3

In the previous two rounds of the battle against Negreanu, Hellmuth had fallen behind before battling back for the win. In fact, in the very first round of High Stakes Duel II, Hellmuth had but a singular 5000 chip, yet came back for an unbelievable victory. In Round 3 on Wednesday, Hellmuth seemed to have figured out that playing from the lead was better than fighting from behind.

Although Negreanu was able to step out to a slim early lead, Hellmuth would seize control of the opening action with a bold bluff. After Negreanu opened the betting with pocket deuces, Hellmuth took a radical course of action in reraising the stakes with just an 8♣ 3♣ in his pocket. Negreanu would push back with a three-bet of 13K, but Hellmuth fired back with another bet and, this time, Negreanu just called.

A 10-6-J flop failed to connect with either player, but it did not stop Hellmuth from check-calling a bet out of Negreanu. After a 6♣ put Hellmuth on a four-flush and paired the board, he fired out a bet that Negreanu pondered for quite some time. Eventually Negreanu found a fold with his leading pocket deuces and the chip swing put Hellmuth into the lead.

The duo would swap the lead back and forth before Hellmuth took down Negreanu in a cooler. Negreanu limped pre-flop with a 6-5 and Hellmuth checked his option with a 10-6 to see a 2-7-9 flop. Hellmuth would check-call a bet to hit the jackpot on the turn. An eight came, giving Negreanu the sucker-end of the straight and Hellmuth a ten-high (and leading) straight, and the wick was lit.

After Negreanu fired a bet following a Hellmuth check, Hellmuth kicked it into drive with a check raise. Negreanu, slightly under the starting stack of 200,000 in chips, decided to make a stand with his nine-high straight and put the remainder of his chips in the center. Hellmuth simply said, “I have to call,” as he tossed his cards up to show his ten-high straight. After a blank came on the river, Hellmuth was the victor in Round 3.

“This was the match I played my best poker,” Hellmuth noted at the conclusion of Round 3. “He started with an amazing card rush and got me down before I went for the crazy bluff with the eight-three of clubs. I just went nuts. I thought he couldn’t call me, and I was right. After that hand, I felt really confident and said, ‘This is great, I’m going to win this thing,’ and then I got him down to 60,000, and I had 340,000. But you know, I’ve played a lot of poker in my life, and I’ve seen people come back, and even I came back once. It was just a matter of staying focused, and I knew I just didn’t want to make any mistakes.” With the conclusion of Round 3, Hellmuth had the opportunity to call a close to the High Stakes Duel II festivities and he did.

This brings up an intriguing question – will Hellmuth try to grow that streak? There are several players who might want to take on Hellmuth in the High Stakes Duel format, but it would have to be a matchup that would be intriguing to the audience. Hellmuth against Doug Polk might be interesting, but because Hellmuth prefers the live format and Polk the online game, it would mean that it is highly unlikely we see this battle.

Who else could there be? Hellmuth against Jonathan Little? Maybe Hellmuth against the Living Legend, Doyle Brunson? The question is a good one as Hellmuth has proven, despite those that didn’t believe that he could do it, to be the master of the High Stakes Duel format.