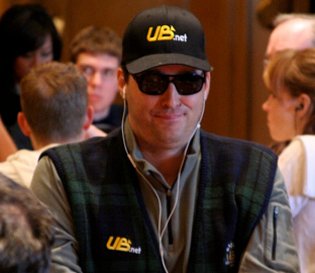 A win for UB.com pro Phil Hellmuth in Event #41 of the 2010 World Series of Poker (WSOP), $1,500 Pot Limit Omaha High-Low Split Eight or Better, would be monumental on several levels. First, a “W” would mean Hellmuth’s 12th bracelet, a new record. Also, it would mark the “Poker Brat’s” first win in a non-Hold’em tournament, getting the proverbial monkey off his back. Hellmuth owns the fourth largest stack with 15 players remaining.

Hellmuth already has two deep runs at this year’s World Series. The 11-time bracelet winner finished 15th in Event #8, $1,500 No Limit Hold’em, and cashed for $25,000. Nine events later, it was back to the cage after finishing 50th in a $5,000 No Limit Hold’em tournament for $14,000. Given that all of his hardware has come in No Limit Hold’em, many consider Hellmuth to be the top player in the world in that genre of poker.

Hellmuth may have felt the heat earlier this week from Full Tilt Poker pro Phil Ivey, who said he’s gunning for 30 bracelets after taking down his eighth in a $3,000 HORSE event. Hellmuth responded with a deep run in Event #41, dispatching Cody Culp in 17th place. Hellmuth flopped top set, which held for the win.

Hellmuth’s final chirp came just before 3:00am PT on Thursday morning after play had concluded for the day: “15 left in Omaha 8/b, and I am 4th in chips w $331,000, blinds will be 6k-12k tomorrow. All I can do is focus on playing great poker.” Hellmuth will have to contend with a talented lineup that includes three-time bracelet winner and PokerStars sponsored pro Barry Greenstein. Here’s how the final 15 shake out:

Elsewhere, UB.com pro Annie Duke finished Day 1 of the $10,000 HORSE Championship in 39th place with a stack of 61,600. Russia’s Sergey Altbregin and the World Poker Tour’s all-time money leader, Carlos Mortensen, lead the way with stacks of 143,000 and 125,800, respectively. A field of 169 will take to the felts today. Duke took a sizable hit to her stack during Hold’em play after she turned two pair with A-Q. However, close friend Perry Friedman, who was instrumental to Duke’s fundraising efforts on NBC’s “Celebrity Apprentice,” held pocket fives for a set and scooped a mammoth pot.

Duke one-outed Ivey in Omaha, making quads against Ivey’s trip aces. According to coverage found on WSOP.com, Duke exclaimed, “Oh my god! I just hit a one-outer on Phil Ivey! I had three queens in Omaha, and he had three aces, and I made quads!” In case you’re wondering, Ivey did not reach Day 2 of the HORSE Championship.

Will it be bracelet #12 for Hellmuth today? Stay tuned to Poker News Daily to find out.