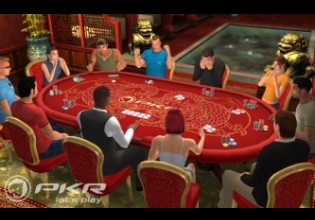 Once again demonstrating the need in the States of America for regulated online gaming and poker if not in the international industry, the online poker site PKR Poker seems to have shut their doors in citing “financial difficulties” as the reason for the shutdown.

Over the past week, there has been some precursors of what would happen over the weekend. On Wednesday last week, the site shut down for what was said to be “regular maintenance” for PKR. That “regular maintenance” stretched out to a full day before the error message was changed to indicate that there were financial issues with PKR that required the shutdown of the site. The problem with this is that, with the site shut down, there was no way for players to access their accounts nor withdraw any money that they had.

If that wasn’t reason to panic, the network supporting PKR’s withdrawal of service sent everyone into a frenzy. The Microgaming Network, who hosted PKR since March of last year, shut down their support of the site, leading to another ominous statement from PKR themselves. According to a statement from PKR, the companies’ corporate entities, PKR Limited and PKR Technologies, had filed “applications” (could be read as bankruptcy proceedings) with the Court for Administrative Orders in the United Kingdom. That hearing is supposed to be heard today.

With the courts getting involved, Microgaming removing their support (the company has stated that PKR held their players’ money, not the network), and the dribble of statements from the site, it doesn’t look good for players who had any sort of funds on the site. For those affiliates who were making some coin from sending players to play at PKR, they have been informed to remove any banner ads or other advertising links from their sites and, as with the players, any monies they are owed could be gone.

The shutdown of PKR is an excellent demonstration of why there needs to be stronger regulation of the online gaming industry worldwide. PKR is simply the latest site – joining such sites as Lock Poker, Ultimate Bet, Absolute Poker, and others – that has shut down operations and left players in the lurch. The supposed “governance” bodies that look over and license the sites – the various Caribbean organizations, those on the Isle of Man and the Kahnawake Gaming Commission, which hosts many of the sites – have NEVER held the rooms responsible for their closure nor their failure to pay back players for the funds they had on the sites.

In the States of America, and in particular the states that have regulated and licensed online gaming and/or poker, there has been a recourse for the players. When Ultimate Gaming shut down – leaving players in Nevada (poker only) and New Jersey (online gaming/poker) with bankrolls on the site – there was a process established for those players to receive their monies FIRST, rather than the normal process of bankruptcy where the players would have been treated as creditors and may or may not have seen their money. To this date, Ultimate Gaming’s calm, orderly shutdown is the epitome of how to treat the customers when a gaming site goes under.

When it came out, PKR Poker was quite innovative in its approach. Advertised as the first 3D online poker site, that stylish delivery of the game never seemed to catch on with the online poker community. Although it has battled valiantly through the years, PKR could never mount up enough momentum to challenge partypoker at first and then PokerStars after its ascension to the #1 slot in the industry. At one time sporting a stable of sponsored professionals that included Sofia Lovgren (LONG ago) and Jake Cody, PKR hadn’t been that active in the poker sponsorship field over the past couple of years.

Players who have funds on the site or other questions are encouraged to e-mail [email protected], but don’t expect an immediate reply, if one is forthcoming at all.