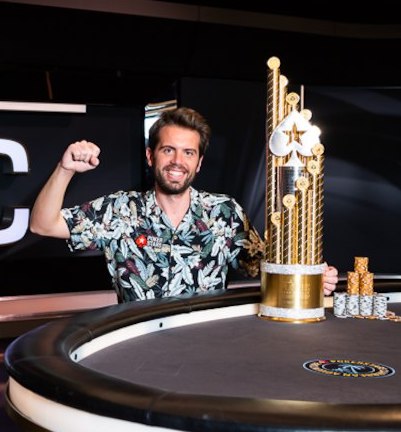 When they first conceived of it, it was probably in the back of the minds of the bosses at PokerStars that one of the recipients of their $30,000 Platinum Pass would win the event. That came to fruition on Thursday night as Ramon Colillas, one of 320 players who received a free roll into the biggest $25,000 buy in tournament of all time, emerged as the champion of the PokerStars Players’ Championship (PSPC) and took home the $5.1 million prize.

Anyone’s Match at the Start

The 1039 players who started the tournament had been eliminated to the final eight by the time Thursday’s final table began play. It was a tightly bunched crowd that vied for the inaugural PSPC title, with Scott Baumstein holding a slight edge (10.75 million chips) for the chip lead over the other Platinum Pass recipient who made the final table, Marc Rivera (10.35 million). Then came three players packed within a half million chips of each other – Julien Martini (8.6 million), Day 2 chip leader Farid Jattin (8.525 million) and Colillas (8.3 million). Rounding out the start of the final table was Jason Koonce (7.125 million), Day 1 chip leader Talal Shakerchi (5.5 million) and a short-stacked Marc Perrault (2.275 million).

Martini surged to the lead in the early action by knocking off Shakerchi in cruel fashion. After Rivera opened the betting and Martini three-bet the action, Shakerchi pushed all in for his remaining stack. While Rivera got out of the way, Martini didn’t believe Shakerchi and made the call. When the cards were turned up, everyone saw the huge misstep that Martini had made:

The poker gods were initially good to Shakerchi, coming with a rainbow flop of 3-K♠-2 to give nothing to Martini. A 10♠ opened up the world for Martini – any spade or Jack would allow him to win – and the river 5♠ delivered the crushing beat to Shakerchi. What had started with so much promise for Shakerchi ended in a devastating bad beat as he left the arena in eighth place.

Now in the lead, Martini kept putting the pressure on the table. He knocked off Jattin in seventh place, his Big Slick over Jattin’s A-J, and cracked the 30 million chip mark in bluffing Rivera off a hand. After Colillas took down Perrault (happy to level up after coming in as the shorty at the table) in sixth place, Martini had almost half the chips in play with Colillas, Baumstein, Rivera and Koonce chasing him.

Colillas continued to rise up the leaderboard as he took out Koonce in fifth with “Presto” (pocket fives) against Koonce’s 10♦ 7♦ button push. Just as Colillas was making his charge, however, Martini took down Baumstein in fourth to establish his dominance over his two remaining opponents. As the end of Level 34 arrived, Martini (39.675 million) was in command as Rivera (11.425 million) and Colillas (10.35 million) fought to get back in the event.

Unless there was something dramatic, there was going to be one Platinum Pass who would battle Martini for the title. Rivera saw his stack dwindle under Colillas’ and, after a Martini raise on the button, he would push his remaining eight million chips to the center. Martini immediately called and tabled an A-K for battle, thoroughly dominating the A-3 of Rivera. Once the Queen-high board was dealt out, Rivera was eliminated in third place and Martini (42 million) was in a prime position heads up against Colillas (19.45 million).

Facing over a 2:1 disadvantage, Colillas had to get something going quickly and he did. He pulled within 12 million chips of Martini before, on Hand 80, the pendulum swung the other way. After Martini had flopped a heart flush, he fired on the flop, turn and river (with the river bet all in), but he was unable to shake Colillas. There was a reason for that; Colillas had flopped a pair of Queens, turn trips and then rivered a five to backdoor a miraculous boat against Martini. The incredibly lucky turn of events saw Colillas double up to more than 48 million in chips and Martini left with around 13 million.

It would take another 22 hands, but Martini would never get back in the game. Colillas called an all in of Martini and, with Colillas holding A-5 off suit to Martini’s J♣ 9♣, saw a A-9-8 flop hit both men. Martini was looking for the nine to pair or a Jack, but it wouldn’t come home. After a deuce on the turn and a five on the river, Martini was eliminated in second place and Ramon Colillas was the champion of the PokerStars Players’ Championship.

The close of the PokerStars Players’ Championship by no means closes the action from Paradise Island in the Bahamas. The Atlantis Casino Resort still has several events on the PokerStars Caribbean Adventure schedule left, including the unlimited rebuy $100,000 Super High Roller and the $10,000 two-starting day Main Event. For now, however, Ramon Colillas is celebrating how he freerolled his way to victory in the inaugural running of the PokerStars Players’ Championship, a tournament that could become a monumental event on the international poker schedule should it continue.