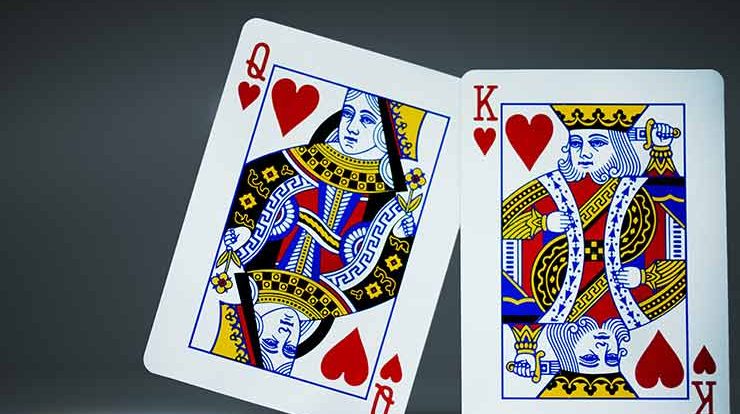 In sitting at the poker table, players will try to mix up their game lest their opposition gets locked in that they are taking an ABC approach to playing. One of the more popular ways to deviate from the norm but with still apparently strong holdings is to play paint cards. “Paint” cards – any combination of face cards in the deck (K-Q, K-J, Q-J) – can look great from the beginning, but you have to be extremely careful as they are unlikely to win because opponents you can face can hold kickers that defeat your hand.

The Setup and Mistake From the Start

Recently I was involved in a poker discussion where this type of question arose. “I’m on the button with K-J of diamonds and $400 and UTG (under the gun, or first to act) makes it $23 to go,” the player said. “It’s pretty standard for this (home) game, $1/$3 and very juicy. Anyway, four people call by the time the action gets to me and I called too. Flop is J-4-7 with a diamond, the original raiser makes it $75 and I was the only one who called. Turn was a six of diamonds and the original raiser bets out $150.”

“I tanked for a few minutes,” the storyteller continued, “but I decide to make the call. I thought about a raise but didn’t pull the trigger. River was a ten of clubs and he pushes his remaining stack that covers mine. I call and lost…he had A-J. What do you think?”

First off, the player made the mistake of playing against too many opponents. With a big raise from under the gun and four other callers in front of him, the K-J he was holding should have shriveled up and been tossed in the muck. The UTG raise is quite strong, figuring for at least a mid-pair or higher or A-K, and the FOUR callers could literally have anything – baby pairs, middle suited connectors, maybe weaker suited Aces even.

With his paint cards on the button, that’s not exactly the weapons you need. He would have had to hit the flop perfect, something along the lines of K-J-x, because you couldn’t even be assured that you would be ahead on a K-K-x or J-J-x flop. Even with the advantage of position, you’d still like to have more ammunition for the upcoming war, especially with so many opponents.

But He Played the Hand, So…

With top pair and a King kicker, he might have thought he was leading. His opposition could have held a hand like A-J that beat him on the flop, just the type of hands that players, especially in a loose game, will raise with under the gun. It’s very true that he could have held a Q-J or maybe even a J-10, but most players wouldn’t be raising from under the gun with the hand.

The second diamond on the turn is what sealed the fate of my buddy. Once he was four-flushed with top pair and King kicker, he was going to go to the river to see what would happen. After the river blanked, he had a tough decision – was he ready to risk what he had on the table one pair or could he let it go and give his opponent credit for a better hand (or a well-played bluff)? In poker, you usually want a little more than one pair to go to battle with, especially with the additional options that your UTG opponent was overplaying a pocket pair of sixes or tens that caught up with you on the turn or river.

There were a couple of mistakes that were made in this hand. First, with five opponents in front, the player needed to have a more optimal hand than the paint cards (it could be said that, with five players in front, anything short of Aces needed to be tossed). Especially in a game where the bets are big and any hand can be the one played for your stack, you just don’t want to bleed money away.

Second, the player took a way too passive approach to playing the hand. At no point did he ever try to find out where he was with a raise or even a semi-bluff. By only calling bets pre-flop, on the flop, on the turn and the river, he basically handed over his stack to his opponent when he might have found a way to fold with an appropriate raise. But, if he did pop his heads-up opponent at any point, would he have been willing to go with just his top pair/King kicker for his stack? Whenever you raise the stakes, you should have a plan for what you will do after your opponent responds by either calling or re-raising your bet.

Paint cards can be a sneaky and profitable play, but it works best with one to two players and not so much when the entire table is coming along for the ride. Additionally, you have to find out at some point just where you are in the hand, especially if you do hit a piece of the flop. IN this case, my buddy’s entire $400 stack went away, an expensive lesson that he’s going to remember the next time it comes around.