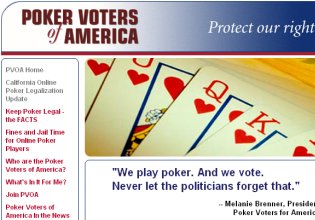 One of the organizations at the forefront of the movement to bring legalized intrastate online poker to states like California is the Poker Voters of America, or PVA. Recently, Poker News Daily caught up with PVA Executive Director Melanie Brenner to assess the odds of regulated gaming coming to the massive West Coast state.

Poker News Daily: Thanks for joining us. Tell us where we stand with regards to bringing intrastate online poker or internet gambling to California. We understand that State Senator Rod Wright had introduced SB 1485, but the bill stalled on its way to becoming law earlier this year.

Melanie Brenner: The California legislature’s session has ended, but we don’t have a budget yet, so they will be coming back to deal with those issues. When Senator Rod Wright had his hearing, it became clear that there wasn’t the broad support in California that we hoped there would be, so the PVA got actively involved in meeting with major stakeholders, listening to their concerns, and getting feedback.

The initial legislation from the year before, the Morongo bill, called for a single hub they were going to run. We met with them and said that there’s no way that California or any state would legislate to give a contract to one provider. It’s also not good for the game.

Based on meetings with the Morongo tribe, Southern California card rooms, and smaller Indian tribes, we came up with proposed amendments to Wright’s bill in the hopes that we can all get together in a meeting and see if we can come to an agreement.

PND: What were some of the proposed amendments to Wright’s bill? We understand that organizations like the Poker Players Alliance (PPA) took issue with the bill only calling for three internet gambling hubs.

Melanie Brenner: One of the very big issues for the tribes was the scope of the games. What they don’t want to see is this passed and then it becomes full online casino gaming. The amendment calls for non-banked games, which was language they were comfortable with.

One of the other amendments was about the number of hubs. It was initially at three hubs and we expanded it to five with 20-year contracts and reassessment after five years. The biggest addition was a mitigation fund. There’s a chance for everyone in California to make something. Part of the money the state collects is set aside and all tribes get a little piece of that.

PND: The Bicycle Casino, Hawaiian Gardens, Hollywood Park, and Commerce Casino have come out against HR 2267, Congressman Barney Frank’s bill legalizing and regulating online gambling in the United States on a Federal level. Give us your take on what the Southern California casinos are looking for.

Melanie Brenner: They are looking at how they play in this new arena. The reality that they are not going to own this has become very clear. It’s not good for the system and one of the things I cautioned them is that they’re trying to create a system that will fail. When we’re looking to pass this in other states, the last thing we need is a system that doesn’t work as a model. We’d oppose any legislation that provided a sole source contract.

PND: Talk about the importance of providing player protections online and how those differ from what’s found in brick-and-mortar casinos.

Melanie Brenner: A regulated system is going to give you better player protections than what we have now online and better than what you’d find in a land-based casino. If someone in a land-based casino tells a manger they got ripped off, what’s the method for following up? Online, the data is all there. You can go back, reevaluate, and see if there’s a problem. That’s a big selling point for us when we’re explaining this to people.

PND: What will be the first state in the Union to offer intrastate online poker?

Melanie Brenner: I’m still betting on California. I’m saying that because we have a budget deficit, the legislature has to come up with some revenue, and we’re one of the few sources out there. We’ve made big steps over the last six to eight weeks meting with big stakeholders in California to get them involved.

PND: Describe the tribal influence in the decision-making process in California.

Melanie Brenner: California has 91 card rooms and over 100 Indian tribes. We know we couldn’t pass this legislation without tribal support. If you look back to the Morongo tribe’s initial legislation, I was so excited that I was going to send them a case of champagne. The tribes were actually standing up and saying that they wanted this.

We are showing them a great way to increase revenues without a big capital outlay. In all of my presentations, I say that if you are a business today without an online component in your business plan, I strongly suggest you work on your exit strategy.

PND: News hit the industry this week that the Atlantis Internet Group is teaming with Indian tribes to bring a limited form of interstate online poker to life. Even though it’s on a very small scale, it has to be a monumental development.

Melanie Brenner: I love seeing things like that because it shows me that the mindset is moving to where people are figuring out how to incorporate the internet. However, the whole idea of playing online is that you’re playing at home. Why would I want to get dressed and go to a casino to play online? It’s good from a policy standpoint, but is it something that’s going to change the business? No.