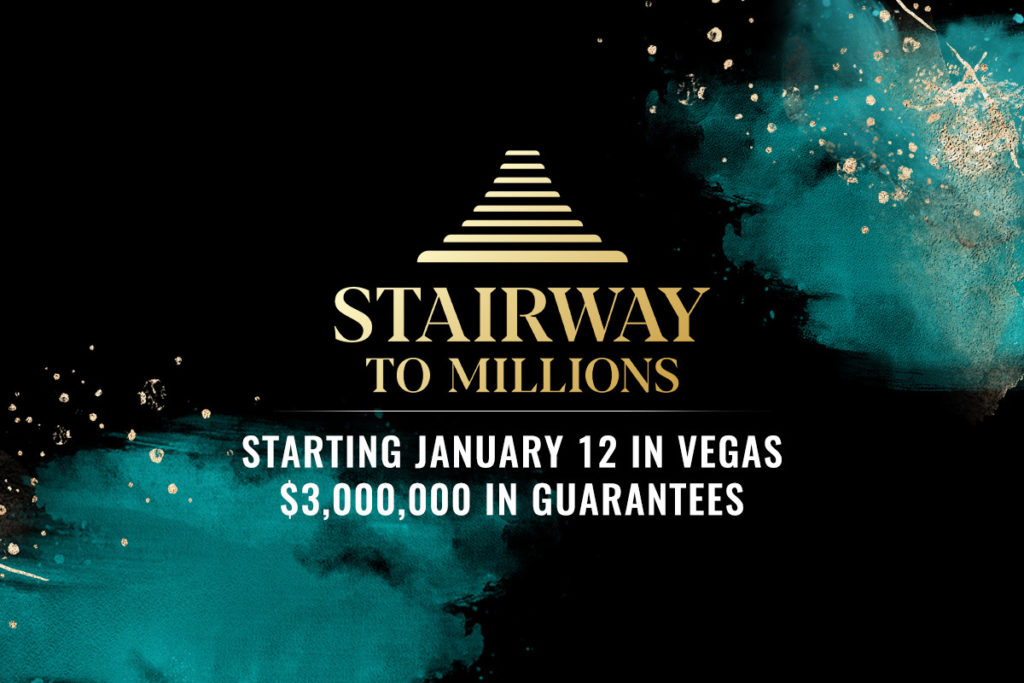 The latest effort from PokerGO to create a tournament poker schedule is its “Stairway to Millions,” honestly not an original idea (more on this in a moment). The “Stairway to Millions” kicked off on Wednesday with its first tournament at ARIA Resort & Casino and, to PokerGO’s credit, it actually turned out to be a decent sized event. The remainder of the eight-tournament schedule, if successful, could give PokerGO a roadmap on how to conduct these “high roller” style events in the future.

When PokerGO created the “Stairway to Millions” tournament schedule process, it was not exactly an original idea. PokerStars several years ago created their “STEPS” tournaments, a series of events that, if you performed well enough, you could earn your way to the highest dollar tournament for a minimal expenditure. This itself was arguably putting the satellite system on steroids and tying together a series of tournaments towards an end purpose.

Under PokerGO’s “Stairway to Millions,” players would take part in the first event, a $1000 buy in tournament. Those who made the money in Event #1 earned their seat for Event #2, a $2000 tournament, along with a bit of cash for their efforts. This continues up a graduated scale:

(Note: as these are unlimited reentry events, the seat is only for the FIRST buy-in)

This roster of events is potentially a way for PokerGO to solve their issues with their “High Roller” tournaments. Last week, only 18 identifiable players came out for the 2022 PokerGO Tour Main Event at The Venetian in Las Vegas, a total of players that had to be a bit embarrassing for the second-year tournament circuit. By offering this “stairway” system, PokerGO not only makes its “high roller” events more welcoming to those who do not have the deepest pockets, but also allows for a tournament to build momentum towards an end goal – in this case, the final $100,000 “Stairway to Millions” Main Event.

The only way the “Stairway to Millions” works, however, is if the players come out for the first step up the ladder. On Wednesday, the players did just that.

190 entries were received in the $1000 buy-in Event #1, bringing some credibility to the competition. A total of 28 players took home cash from the event, with those 28 players also receiving a seat in Event #2, the $2000 buy-in tournament that took place on Thursday. Such players as Shannon Shorr, Stephen Song, Chance Kornuth, and Stan Jablonski locked up their seats in Event #2 in this manner.

The six handed final table had some notable names in its seats, including 2021 POY runner up Qing Liu, Justin Saliba and Joseph ‘subiime” Cheong. At the end, it came down to start of day chip leader Rich Dixon and Daniel Sepiol squaring off for the top prize, with Sepiol able to vanquish Dixon to take the top prize:

Thursday saw Event #2, the $2000 No Limit Hold’em tournament on the “Stairway to Millions” schedule, take to the felt. A total of 129 entries would come out for the action, with 19 of those players earning both cash and the chance to continue on with a $4000 seat in Event #3. A few players were able to take advantage of their Event #1 work, with Song and Liu cashing in Event #2 and moving on to Event #3. Another player who used his Event #1 work was Kornuth, but he would take his opportunity a bit further. Kornuth would come out on top of the six-handed official final table, defeating fellow pro Eric Baldwin in heads up action, to earn another ticket to Event #3:

Perhaps Kornuth said it best when, in his post tournament interview, he was asked about the “Stairway to Millions” process. “I think, in general, it’s really, really good to help people have the opportunity to play some of the higher buy-in PokerGO events that are on stream,” Kornuth said. “Hats off to them (PokerGO) for setting up this Stairway to Millions. I think it’s great.”