Home PokerStars Adds $179,000 in Guarantees in the Final Week of MicroMillions 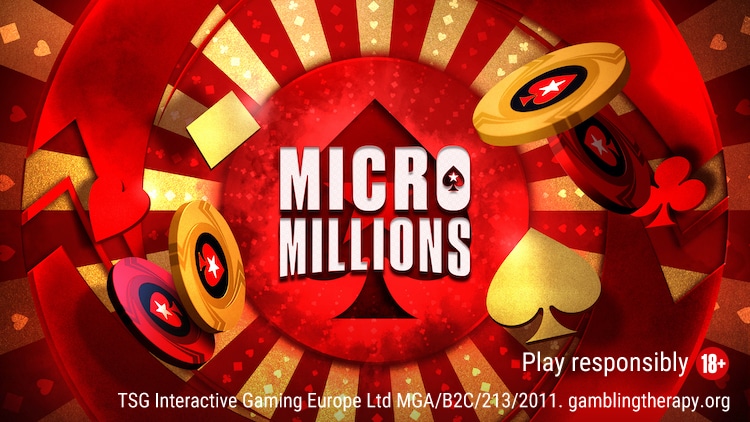 PokerStars’ MicroMillions series is in the back half of the schedule, but things have gone so well for the ultra-affordable tournament series this month that Stars has added to the guaranteed prize pools of 20 events. All told, the poker room has juiced the guarantees by $179,000 in tournaments going back to July 24.

The total guaranteed prize pools for the 208 MicroMillions tournaments is now over $4.5 million.

The PokerStars MicroMillions began on July 17 and runs through the end of the month. As opposed to other popular PokerStars series that have loads of three- and four-figure buy-ins (or more), MicroMillions buy-ins start at $1.10 and only go as high as $55 for the High Roller tourney. I could be a high roller!

The $22 Main Event will run on the final day of the series and has a $500,000 guarantee. The way things have been going, though, it would be surprising if that guarantee isn’t easily eclipsed.

Most of the tournaments on the MicroMillions schedule are of the Progressive Knockout (PKO) variety. In a Progressive Knockout event on Stars, about half of the buy-in is added to the regular prize pool, while the other half is added to the bounty pool (I say “about” half because it depends on how much of a rake PokerStars takes in a given tournament). Each player has a preset bounty on their head.

In a normal bounty event, when you eliminate a player, you get their bounty. Simple. In a PKO, though, you only get half their bounty. The other half is then added to your own bounty, making you a more attractive target to the other players.

The main appeal of a PKO tournament is that the action tends to be exciting, as there is added incentive to eliminate opponents. Players sit around and wait for the perfect hand less than they might in a standard tournament. Additionally, it is entirely possible to turn a profit even if you don’t make the money. Eliminate a few players and you can make back your buy-in even if you miss the money bubble.

All of the Tuesday MicroMillions events have already either started or completed, though a few are still in the late registration phase. There are 14 tournaments on tomorrow’s slate. The vast majority are No-Limit Hold’em and most of those are PKO. There is a Pot-Limit Badugi event and a Limit Razz tournament for those who want something a little different. None of Wednesday’s tournaments cost more than $11 to enter. Three of them are ones that PokerStars has boosted the prize pool.