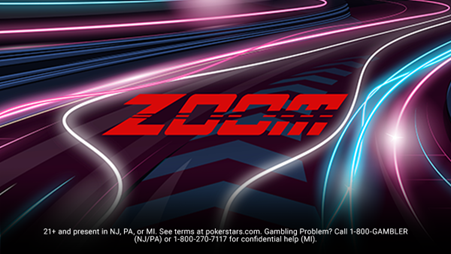 “Limited time,” so get in quickly

PokerStars player pools in Michigan and New Jersey have been combined for about three weeks now, but as is common upon new online poker launches – in this case the launch of an interstate poker network – not all game types have been available from the jump. This could be because PokerStars wanted to make sure there was enough player traffic to support more games, it could be because Stars needed to complete some additional testing, or a combination of both. On Monday, though, the poker operator announced that it will make Zoom Poker cash games available tonight starting at 9:00pm.

There is a catch, though. According to the brief e-mail sent to the media, the popular fast-fold poker format will only be available for a “limited time.” What does that mean? PokerStars didn’t say. Why? PokerStars didn’t specify, though one could guess that it might have to do with the couple reasons I listed. We would suspect that if the Zoom Poker cash game tables produce well, the game format will become a permanent fixture in the Michigan/New Jersey lobby.

To encourage people to play, PokerStars will award the first ten players who start or join a Zoom Poker table within ten minutes of it opening two-times the rewards points for their first ten minutes of action. Not much, but it’s something.

Wonderful for the easily bored

Zoom Poker – and its variants at other online poker rooms – has become popular because it takes the boredom of “fold and wait” out of poker. When you fold in a Zoom game, you are immediately whisked away to another table. Fold there, and off to yet another table you go. An option called “Fast Fold” is available, as well, which allows you to fold and head to another table before it is your turn to act.

If you want to see how the hand turned out once you’re gone, you can hold the “CTRL” key on the PC keyboard while clicking the Fold button.

The poker client attempts to seat players in the same position they would have been in a regular hand rotation when they switch tables, meaning if you were going to be on the button the next hand, the software will try to put you on the button at your new table. It’s not always possible, but you generally don’t have to worry about repeatedly paying a blind.

So Zoom Poker is fantastic for players who want to get in as many hands as possible and can’t stand waiting for the hand to finish when they fold. Just hand after hand after hand. The big disadvantage to playing Zoom Poker is that it is very difficult to get any sort of reads on opponents, as you switch tables constantly. If the player pool is small, you will see the same players frequently, but it will still be tougher to track them, as everyone keeps moving around.

As of about 7:30pm ET Monday, the PokerStars lobby counter says there are over 1,700 players at the Michigan/New Jersey tables (Zoom Poker has yet to open).